First part of a three-part series 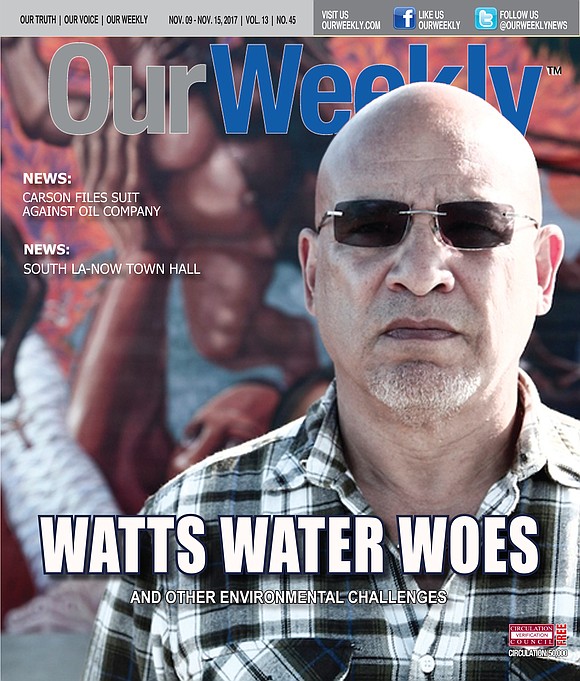 Tim Watkins may be reaching his breaking point.

For decades he’s worked tirelessly to increase awareness of the many environmental hazards plaguing Watts.

So far, he’s received dozens of verbal commitments and promises from peers, colleagues, and big shots who’ve agreed to join his cause. But talking and doing are two separate concepts - and Watkins continues to fight virtually alone.

“I’ve gone to just about every public official I can think of to ask for help,” he bemoaned during a telephone interview.

The raspy sound of his voice quickly elevated to a howl.

Watkins believes he’s done everything in his power to improve conditions in Watts. “ What else am I supposed to do?”

As president and CEO of the Watts Labor Community Action Committee (WLCAC), Watkins has devoted the larger part of his existence to serving the interests of his chosen people.

He knows the Black experience in America is disturbingly predictable for working-class folk and those sitting beneath the poverty line.

Struggle is par for the course - and hopelessness increases with every generation that dares to hope for progress, only to experience the harshness of reality.

For evidence of the numerous maladies tormenting low-income African Americans, a casual observer needn’t look beyond the blighted streets of Watts, Los Angeles.

In a parallel universe, this neighborhood would be a thriving beacon of cultural and economic diversity.

But the residents aren’t living in a dream world - their reality parallels a wide-ranging siege of environmental contamination permeating urban communities nationwide.

Amid growing concerns, a groundbreaking ceremony was held in June for the first phase of a $1 billion redevelopment of the Jordan Downs public housing project in Watts.

The plan aims to convert the 700-unit site into a mixed-use, mixed-income neighborhood of 1,410 units with 160,000 square feet retail space, nine acres of green space and a new recreation center at East 99th Place and Laurel Place.

The plan has been in place for nearly a decade and was delayed due to funding shortages and the discovery that soil at part of the site was contaminated with lead and other toxins from its past use as a steel factory.

In June, the Los Angeles Unified School District submitted documents to CBS revealing lead and arsenic contamination on the football field and baseball field of Jordan High School, which shares a border with the new development.

Monika Shankar, with health advocacy group Physicians for Social Responsibility-Los Angeles told authorities that an underground plume of toxic chemicals, including trichloroethylene, was discovered underneath the development. “Which is a very harmful chemical, especially for children and pregnant mothers,” she explained.

Data from the Center for Disease Control and Prevention (CDC) show that 6 percent of all children ages 1-2 years and 11 percent of Black (non-Hispanic) children ages 1-5 years have blood lead levels in the toxic range. Children with developing bodies are especially vulnerable because their rapidly developing nervous systems are particularly sensitive to the effects of lead.

Exposure to lead can have a wide range of effects on a child’s development and behavior. Even when exposed to small amounts of lead levels, children may appear inattentive, hyperactive and irritable. Children with greater lead levels may also have problems with learning and reading, delayed growth and hearing loss. At high levels, lead can cause permanent brain damage and even death.

“Across the board Watts is suffering,” says Watkins, whose father Ted Watkins founded the WLCAC in 1965, just months before the Watts rebellion.

Following World War II, more than 500,000 African Americans migrated to West Coast cities in hopes of escaping racism and discrimination. However they found both in the west. For many Black Los Angeles residents who lived in Watts, their isolation in that community was evidence that racial equality remained a distant goal as they experienced housing, education, employment, and political discrimination.

These racial injustices caused Watts’ African American population to explode on August 11, 1965 in what would become the Watts Rebellion.

“Nothing has changed,” Watkins declares. “Across the board Watts is at the bottom. Our community suffers from high infant mortality, poor literacy, and chronic recidivism - all problems that we keep getting blamed for as if we’re stupid and can’t pull ourselves up by the bootstraps - but that’s a tremendous falsehood.

“Watts has been poisoned, and I believe with all of my heart that it contributes to some of the turmoil in this area.”

Watkins continued, “There are kids here [Watts] who’re diagnosed with ADHD at 3 years-old. As they matriculate in school, they start having problems reading at grade level, focusing in class, and they struggle with exams. These issues aren’t due to a lack of will from their parents. It’s the poison they’ve been exposed to. I’ll always stand by that.”

Over the decades, Jordan Downs gained a notorious reputation as one of the most dangerous and crime-ridden areas of the city, as it was one of the flashpoints of the Watts riots and also the location of violent gang warfare in the 1980s and early 90s.

In June 2014, state environmental regulators ordered Los Angeles housing officials to test the soil in the Jordan Downs housing project in Watts to determine whether lead contamination on a vacant, city-owned parcel extends onto land where more than 2,500 of the city’s poorest residents live.

Soil contaminated with lead, a poisonous metal, is of particular concern for children, who can play in the dirt, ingest the dust and be afflicted with permanent learning deficiencies and health problems.

Later in 2014, soil tests at the Jordan Downs detected acceptable levels of lead that did not require cleanup, state toxic waste regulators concluded.

The U.S. Environmental Protection Agency (U.S. EPA) and many Public Health agencies have published what they consider to be “safe levels” of certain metals in soil based on their own research or that of other organizations.

Unfortunately, these organizations do not always agree on what is safe. For example, the San Francisco Department of Public Health asserts there is no safe level of lead retention in our body’s digestive and nervous systems.

In May 2016, Los Angeles Department of Water and Power crews tested for water contamination within neighborhoods and schools in South Los Angeles, including Watts.

These inspections followed complaints from both residents and a plea for action from a city councilmember.

According to media sources, murky brown water had been intermittently flowing from taps in and around Watts.

A rep told residents at a city council meeting that pipes in the area did seem “to have a lot of sediment,” so the agency would be doing some “aggressive flushing” to eliminate the dregs and restore the water’s original clarity.

Leading up to the flushing, representatives of the WLCAC collected several bottles of water that were murky enough to concern residents about its cleanliness.

“We’re calling out for attention to our environmental concerns,” he told reporters.

The students were subsequently told to stay away from water fountains and were instead given bottles of water to drink from, announced Councilmember Marqueece Harris-Dawson.

Ava Post, WLCAC program coordinator, recently conducted a qualitative community survey to gauge residents’ feelings and concerns about the environmental quality and conditions in the Watts and Willowbrook area.

She and a team of her colleagues surveyed 200 single households and apartments door-to-door within the Watts and Willowbrook areas on topics of environmental quality conditions.

A variety of questions were developed to determine air quality, water quality, soil quality, safety conditions, reporting rates and desires for improvements, as well as self-reported health outcomes in the area.

The survey was given in both English and Spanish languages to reach the diverse population in the area, and informational brochures on the topics of lead exposure mitigation and air quality reporting were distributed to residents.

According to the data collected, 60 percent of residents reported moderate to extremely poor water quality, with many complaints of water running yellow or brown from taps.

Ninety percent of residents reported that they purchase bottled water for consumption due to poor tap water quality; and 40 percent use water filters at home

Despite these findings, the purified water that the DWP serves to customers meets all requirements for health and safety, insists Johnathan Leung, ass. Director of DWP’s Water Quality Division.

“We know there can be a disconnect between what we determine through our inspections versus what people see and taste. We can’t discount how the residents feel.”

Leung continued, “Iron and magnesium deposits in water have the potential to make it discolored, but they aren’t harmful to the body. Still I would never tell someone to drink [discolored] water because it meets standards.”

“Last year we heard the community loud and clear and we went out and tried to fix the problem by removing sediments from the pipeline. We’re also investing in treatment facilities and affordable technology to ensure the water quality in Watts remains clean.”

Leung mentioned that one of the problems may be that residents aren’t upgrading the piping in their homes.

“Corroded infrastructure is problematic, especially in regard to drinking water. The lead from these antiquated pipes could be seeping into people’s water supply. We’ve considered that and are taking steps toward implementing low-cost, home rehabilitation programs for our customers.”

The coming decade may determine whether humanity will set a course toward a more socially and environmentally sustainable society. A crucial part of this goal is to develop a better understanding of how cooperation can be improved and become more effective for everyday people and the organizations built to keep them safe.