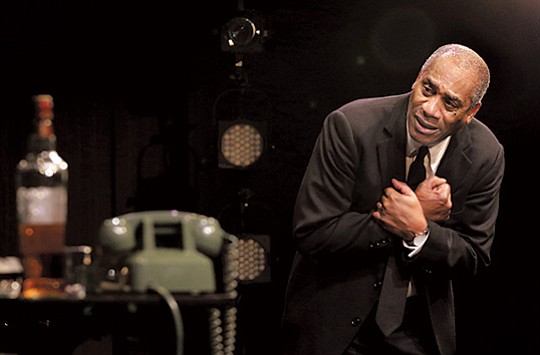 It’s the one performance Joe Morton will never forget. That was the night that the legend Morton was portraying arrived to see his life story staged in the comedic drama “Turn Me Loose.”

“I knew at some point in the evening, [Dick Gregory and I] would be looking into each other’s faces,” said Morton, an Emmy winner and star on ABC’s hit show “Scandal.” “As it turns out, it was the moment I was talking about [civil rights activist] Medgar Evers that I turned [in his direction].

“At that point, it just became a private conversation,” Morton added.

A private conversation between two men - who used art to survive the racist pendulum which swung between tears and tyranny during the civil rights movement.

Morton shared these anecdotes after performing a matinee at The Wallis Annenberg Center for the Performing Arts in Beverly Hills. “Turn Me Loose” has been at The Wallis since Oct. 13 and will conclude its run on Nov. 19th. The 90-minute production shines a light on how Gregory became the first Black comedian to expose white audiences to their own bigotry with disarming humor.

Conceived by writer Gretchen Law and produced in association with musical wunderkind John Legend, the play’s existential story lies between the two men - the actor and the legend - who would become more than kindred souls.

On the surface they are performers: Gregory found comedy and Morton found acting.

Back then, Morton was just a budding actor. But he would find a platform for his views when Writer-Director John Sayles cast him in the socially-conscious sci-fi film “Brotha From Another Planet.”

Morton would go on as to become an accomplished actor, but Gregory - who many comedians admired ranging from Richard Prior to Chris Rock - would eventually forego fame and fortune after marching with Dr. Martin Luther King and becoming Medgar Evers protégé.

“I don’t know of anyone who would give up $17 million dollars a year to become an activist,” said Morton about Gregory. “It was because of Medgar. When Dick went down to Mississippi and met Medgar Evers…and he decided to become this 365 day a year activist.”

Some 50 years later, Morton is 69 and Gregory is 84. The play would become an opportunity to combine their personal and private battles with racism.

“It was glorious,” Morton recalls about that night he and Gregory had that private conversation.

“The first time Christian came to see the show, he told me he called Dick, ‘Pop,’” said Morton about one of Gregory’s sons. Gregory had 11 children. “Dick hated being called ‘Pop.’ But now when Christian sees me, he calls me ‘Pop.’”