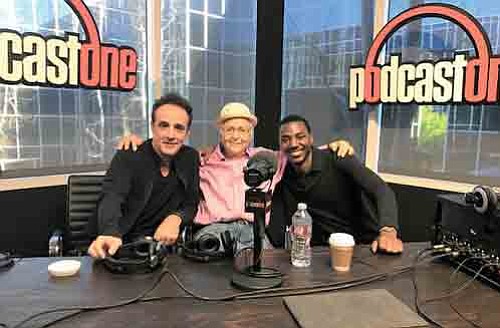 According to the African American Registry, a non-profit educational organization, the n-word endures because it is used over and over again, even by the people it insults.

The question is how do we go about eradicating, deflating, or taking power from that word which is so ingrained in American culture? Or should we simply let it be and deal with it in our own individual way?

Recently, The Hollywood Reporter shared with readers Lear’s n-word chat on his podcast show, “All of the Above,” where Carmichael had the opportunity to talk about his plans to incorporate the n-word into his sitcom.

Carmichael, Lear and co-host Paul Hipp spoke about the word, which the three of them believe only increases the divide in society.

Here is an excerpt from the Podcast:

“Wouldn’t it be better if the word...was available?” said Lear. “Making it the worst thing that could ever happen, so that nobody can say anything but the ‘n-word’ —isn’t that a curse on the word and communication?”

Carmichael: “It’s a curse on the word and childish, and does more harm than good. People think the intention is it’s stopping hatred, but it doesn’t stop hatred and it doesn’t stop, you know, painful language…What it does is preserve a word and make it more dangerous…If we free the word then, perhaps, it will be less dangerous and you won’t feel the need to fight the person who says it.”

Hipp: “Take the power away.”

Carmichael: “Exactly. Take the power away from it.”

The trio decides to say the n-word in unison during the podcast but not before Hipp questioned Carmichael about his intentions of incorporating it.

Hipp: “Did you have to fight for that episode, to be able to say it?”

Carmichael: “It’s some pushback. It’s some concern, but we say it with the best intention. It’s always for the sake of discussion, you know, and that’s what’s fun about this format, is that it’s for the sake of discussion. We want to talk about it, and we want to talk about why you should use it at times and why you shouldn’t use it, and it’s a pretty balanced argument…I’m really excited that I’m here for this groundbreaking.”

Carmichael: “By the way, that may be one of the greatest moments of my life…I think we’ve done so much for race relations in that moment. A couple of people are angry. Good for them, though. I hope a couple people got angry, and I hope more people felt enlightened.”

In an interview, former President Barack Obama used the ‘n-word’ when he talked about the debates over race and guns that had erupted after the arrest of a White man in the racially motivated shooting deaths of nine Black church members in Charleston, South Carolina.