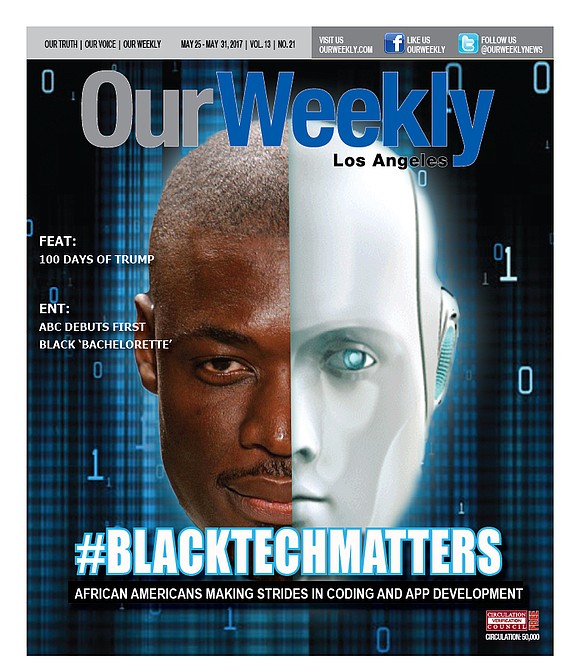 Involving roughly 150 African American young people and 50-plus Silicon Valley techies, the techfest included two challenges around app development: one, to help the San Francisco Bay Area African American community use technology to enhance opportunities for employment, entrepreneurship, and education; and another, to increase awareness of fitness activities, events and exercise.

The East Coast is getting in on the app and coding movement as well. Google, for example, has partnered with Howard University and Washington, D.C. Mayor Muriel Bowser with a program called In3, which provides space and opportunities for people of color to develop their skills in the arenas of coding, gaming and app development.

Aaron Saunders, founder and CEO of Clearly Innovative, wants to transform the tech landscape while giving Black entrepreneurs a seat at the table with Inclusive Innovation Incubator, known as “In3,” a co-working space for tech entrepreneurs who are in their launch phase or wanting to grow a business.

With 60 workstations, 11 offices and five classrooms, the 8,000-square-foot space comes with free Wi-Fi upon reservation, and daily and monthly membership plans.

Saunders says he designed In3 to “train and educate entrepreneurs in underrepresented communities so they can develop skills without having to be in Silicon Valley. In3 is on the campus of Howard University and is easily accessible to students and those living in the District.

During its recent grand opening, In3 hosted more than 25 free sessions on coding, fundraising and developing business startups for tech industry professionals.

“That’s why having a physical space is so important, you can point to something and say, ‘Here’s where we can help you solve your problem and introduce you to entrepreneurs,’” Saunders told NBC News. “Our goal is build the community, prepare the entrepreneurs and slowly introduce other individuals into the community to address some of the other things we’re lacking in the community and one of the biggest things is capital.”

Sengbe agrees that capital to build centers such as In3 and provide scholarships is an issue. He also believes race is an issue when it comes to hiring Black techies. But he also faults Black media for failing to showcase the Black techies who do exist.

“Any Silicon Valley investor will tell you it takes more than an idea, it takes something special in the founder to execute that idea into a job creating a profitable company. That can be a bit more of a challenge for products targeting Black society,” Sengbe recently told BlackNews.com.

“I would argue that Black techies are the most discriminated against demographic in Black media… because for the most part, no one knows we exist. No Black media talks tech, not Ebony, Essence, Vibe, BET… you name it. In the last eight years, a revolutionary technology like bitcoin has been the most profitable investment asset, yet you’ll find nothing about it in Black media.”

Sengbe added: “You can ask 100 Black folk reading this article to point to one app on their phone by a Black developer and you’ll likely get 0 out of 100. Out of sight, out of mind is a real challenge that’s costing Black American society thousands of high paying tech jobs and billions of dollars. By paying attention to the free games/apps you download, you can play a part in shifting millions of dollars in ad revenue to job creating startups in Oakland, Detroit, Chicago, etc…”