The strength of Black media 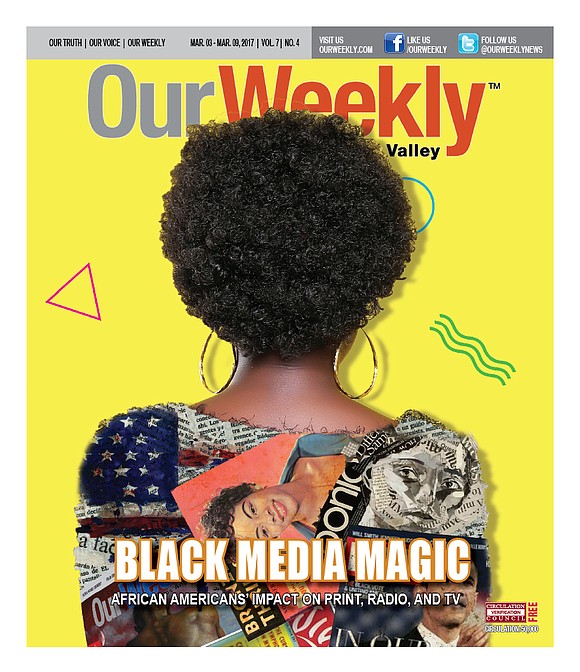 African Americans have played a pivotal role in helping to shape American journalism. From the abolitionist crusade of Frederick Douglass’ “The North Star,” to the popular “O” magazine published by Oprah Winfrey, the Black press has traditionally shined a spotlight on the pressing issues pertaining to its diverse community.

Ebony magazine is perhaps the most famous Black publication. Founded by John H. Johnson, Ebony was the standard-bearer of Johnson Publishing Co. and at its height boasted a circulation of almost 2 million readers. Johnson used a $500 loan in 1942 to launch a business empire that made him one of America’s most influential businessmen with his company eventually securing major holdings in book and magazine publishing, fashion and cosmetics, and radio and television stations.

Ebony was an immediate hit in Black households when it debuted in 1945. The format was similar to that of Look and Life magazines and through the years featured the influential African Americans of the day, ranging from politicians, entertainers, athletes and businesspersons. Ebony’s sister publication, Jet magazine, was a popular addition to the company in 1951 and served as a “sidebar” or adjunct to some of the major stories about African Americans. In the 1980s, Johnson Publishing Co. produced the Ebony/Jet Showcase which was a spin-off television program from the two magazines; in time the show became the only Black-syndicated program to reach 92 percent of Black U.S. television households.

Johnson sometimes said he was in the business of inspiring people, heralding achievements like the first Black woman to become a Rhodes Scholar, or in its powerful 1965 cover “The White Problem in America.” Each year Ebony would list the “100 Most Influential Black Americans” with names like Dorothy Height, Edward Brooke, Tom Bradley, Willie Mays, Sidney Poitier, Lena Horne, Roy Wilkins, James Baldwin and Barbara Jordan. In 1982 Johnson became the first African American on Forbes magazine’s list of the 400 wealthiest Americans. Johnson even extended his empire to Africa with Ebony South Africa which ran from 1995-2000.

The Chicago Defender was the most influential Black newspaper at the turn of the 20th Century; more than two-thirds of its readership was outside its homebase of Chicago. Its publisher, Robert S. Abbott, called it “The World’s Greatest Weekly” as it incorporated the type of “yellow journalism” made famous by Joseph Pulitzer and William Randolph Hearst in New York City. The Defender had more freedom to denounce issues outright, and its editorial position was militant in attacking racial inequalities.

They used sensationalist headlines (similar to today’s New York Post), graphic images and the novelty of red ink to capture the reader’s attention and to convey the horrors of lynchings, rapes, assaults and other attacks on Black people. At one time, each paper sold was read by four to five African Americans, putting its readership over 500,000 people each week. It was the first Black newspaper with a circulation over 100,000 and was the first Black paper to have a health column and full page of comics.

During World War I, the Defender supported the “Great Migration” movement which resulted in more than 1.5 million African Americans migrating from the south to the north between 1915-1925. The defender covered in detail the “Red Summer Riots” of 1919, a series of race riots taking place then across the country. The paper campaigned for anti-lynching legislation and for integrated sports. Its columnists included Walter White and Langston Hughes; the Defender was the first media outlet to publish a number of Hughes’ Pulitzer Prize-winning poems.

The Pittsburgh Courier was one of the most popular and influential Black newspapers of its generation. It began shortly after the Chicago Defender (1907) by the end of his run in 1966 had become part of the media publishing empire of John H. Sengstacke who would rename it the New Pittsburgh Courier. In the 1920s, the Courier worked as a tool for social progress, specifically in covering injustices of African Americans. One such campaign was its support of the Brotherhood of Sleeping Car Porters which fought for equal treatment by the Pullman Company which oversaw railway workers.

The paper also advocated better education for Black students, and equal employment and union opportunities. The Courier didn’t always agree with the civil rights agenda of the NAACP and sometimes found itself at odds with W.E.B. Du Bois, Walter White and other Black leaders over a variety of civil rights issues. Du Bois would eventually become a regular columnist with the publication.

In 1938, the Courier pushed President Franklin Roosevelt to integrate Black units in the armed forces, and it played a significant role in politically realigning African Americans with the Democratic Party when publisher Robert L. Vann urged his readership in 1932 by writing: “My friends, go home and turn Lincoln’s picture to the wall.” The “Pittsburgh Courier Radio Hour” in 1927 was broadcast from New York City and helped to boost the paper’s reputation as a leading voice for Black America.

The Courier earned a place in civil rights history for its “Double V” (“Victory Overseas/Victory at Home”) campaign during World War II. The campaign provided a voice for Black military personnel and pressed for the “elimination of the ban which prevents loyal Negro Americans from full participation in the defense industries of the country.” These efforts would lead to President Harry Truman signing Executive Order 9981 in 1948 which began the process of integrating the United States military. As well, the “Double V” campaign provided the impetus for a series of articles by sports writer Wendell Smith to encourage the integration of American professional sports, notably the signing of Jackie Robinson by the Brooklyn Dodgers in 1946.

‘Don’t Buy Where You Can’t Work’

Los Angeles has a proud history of Black newspapers. The California Eagle in 1879 became the state’s first African American newspaper and reached its prominence under the guidance of editor Charlotta Bass. In the early 1960s the California Eagle, located at 4071 S. Central Ave., had a circulation of more than 21,000 readers and focused its primary coverage on civil rights, specifically in its platform for equitable hiring, patronage of Black businesses, and an end to segregated facilities. One of the famous names from the paper was Loren Miller who began as a reporter in 1930, earned a law degree, and in 1951 became its owner. In 1945, Miller represented Hattie McDaniel and won her case against the “Sugar Hill” restrictive housing covenant. Miller became a superior court judge in 1963.

Col. Leon H. Washington began his newspaper career as an advertising salesman with the California Eagle and by the late 1930s had founded his own publication, The Eastside Shopper, catering to residents along the Central Avenue corridor. By 1941 he had changed the name to the Los Angeles Sentinel which began to rival the California Eagle in circulation and editorial content. He married the paper’s chief photographer, Ruth Brumell, and shortly after named her assistant publisher. The Sentinel championed economic equality and entrepreneurship for African Americans.

Chester Washington and The Wave

In 1949 Washington launched the famous “Don’t Buy Where You Can’t Work” campaign that included a series of non-violent demonstrations against White-owned merchants (i.e. Rhodes Outlet at Vernon and Central avenues) that would not hire Black workers. A library is named after Washington not far from the original location of the Sentinel at 42nd Street and Central Avenue. Ruth Washington remained editor and publisher of the paper until her death in 1990.

Chester Washington (no relation to Col. Washington) began his newspaper career as a sportswriter with the Pittsburgh Courier. In 1955 he became the first Black employee with the Los Angeles Mirror and later would serve as editor of the Los Angeles Sentinel. Washington began his publishing career in earnest in 1966 when he purchased the weekly papers Central News and Southeast News. Over the course of several years, Washington would amass holdings of 13 publications which became Central News-Wave Publications. A golf course is named after Washington in the West Athens district of Los Angeles and was one of the first public courses to allow Blacks to play.

In the midwest, the St. Louis American since its origin in 1928 has become the largest weekly paper in Missouri and tied for first place in the 2010 competition for “Best Weekly Newspaper in North America.” There are also a number of new “start-ups” in African American print media. Our Weekly in Los Angeles boasts a circulation exceeding 50,000 readers in both its local and Antelope Valley editions. The paper is among the latest in the more than 200 different Black newspapers in about 150 cities nationwide.

From Larry McCormick to Pat Harvey

African Americans have comprised some of the nation’s most talented and award-winning television journalists. Among them were Louis Lomax, America’s first Black television journalist who hosted a series of independent television reports and was a popular talk radio show host in the 1960s. Lem Tucker, with NBC News in 1965, became the first Black network news reporter. Max Robinson of ABC News in 1978 became the first African American anchor a network news broadcast, while Ed Bradley, the first Black correspondent to cover the White House, won the nation’s highest journalism awards for his work with “60 Minutes.” Carol Simpson with NBC News in 1975 became the first Black woman to anchor a major network newscast, and would later host the weekend edition of ABC News “World News Tonight.” Additional Black TV news trailblazers include CNN’s Bernard Shaw, Charmaine Hunter Gault with PBS, and the late Gwen Ifill, co-host of “PBS Newshour” and host of “Washington Week.” Locally, Pat Harvey (KCAL) and Jim Hill (KCBS) are among the nation’s longest-tenured television broadcasters. Paula Madison in 2000 became the first African American woman to supervise a network-owned station in a Top 5 market when she was named president and general manager of NBC4 in Los Angeles.

Larry McCormick of KTLA News was one of the nation’s most respected journalists. In 1994 he received the Governor’s Award from the Academy of Television Arts and Sciences. A soundstage at KTLA Studios in Hollywood bears his name. Other Black regional television reporters of note include Ken Jones who broadcast the assassination of Sen. Robert Kennedy in 1968, Chuck Hollis, longtime anchor with KHJ 9 News (now KCAL), and Warren Wilson who with KTLA News in 1991, broke the video coverage of the police beating of Rodney King.