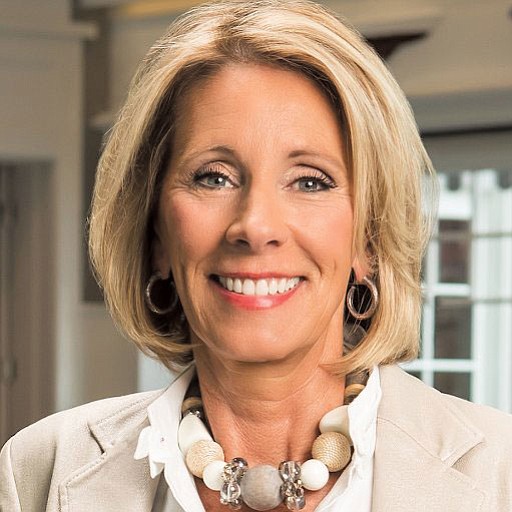 President Donald Trump’s efforts to bolster relations with historically Black colleges erupted in controversy Tuesday after Education Secretary Betsy DeVos released a statement equating the history of the schools — founded during an era of racial segregation — to “school choice” policies.

“HBCUs are real pioneers when it comes to school choice,” DeVos said in the statement, released Monday night in advance of Trump’s planned signing of an executive order giving the schools more clout. “They are living proof that when more options are provided to students, they are afforded greater access and greater quality. Their success has shown that more options help students flourish.”

A number of organizers in the Black community understandable took a offense to her misstatements and Wade Henderson, president and CEO of The Leadership Conference on Civil and Human Rights relased this response:

There is no shortage of academic literature on this subject, including the seminal work, Education of Blacks in the South: 1860-1935, by noted historian James Anderson. I would advise Secretary DeVos to check the facts, study the history, and refrain from suggesting that Jim Crow was about choice for anybody besides segregationist politicians.

Despite unacceptable remnants of slavery and segregation in the nation, through the determination of Black communities and actions by the federal government, we have seen improvement. If we are to continue the progress, we need leaders who understand and comprehend our nation’s history, and enforce our civil rights laws.”

Although HBCUs comprise just three percent of higher education institutions in the U.S., “HBCUs contributed 19 percent of the nearly 9 percent of all bachelor’s degrees in science and engineering awarded to Blacks in 2010,” according to American Institutes for Research (AIR).

During the Obama Administration, the late Dr. George Cooper, headed the White House Initiative on Historically Black Colleges and Universities. Cooper was seceded by Dr. Ivory Toldson, who left the post in June 2016 to lead the Quality Education for Minorities (QEM), a non-profit group in Washington, D.C.

A February 27 photo-op with President Trump in the Oval Office and group “listening session” meeting with Vice President Michael Pence with over 60 HBCU presidents was the first meeting of its kind with HBCU presidents and chancellors in at least eight years.

HBCU presidents, who are in Washington, D.C., this week, also have decided to request $25 billion from the Trump Administration to assist their schools.

At a HBCU president’s reception on Monday night, Grambling President Rick Gallot told the NNPA Newswire that the priorities of HBCUs are, “spending on campus infrastructure and an increase in year around Pell Grants.”

HBCUs collectively lost more than $300 million in grants and tuition after a bureaucratic level decision in 2011 enacted in Obama’s Department of Education made obtaining Parent PLUS loans much more difficult. As a result, 28,000 HBCU students were negatively impacted.

In September 2013, President Obama’s Education Secretary Arne Duncan apologized to HBCU leaders and advocates for the Parent PLUS loan decision. In 2012, Duncan proposed an end to a three-year implementation of summer Pell Grants.

In 2015, President Obama proposed two years of free community college without consulting HBCU advocates. Many of those advocates viewed the proposal as a threat to HBCUs. The proposal, which was never enacted by a Republican-controlled Congress, was later changed to include HBCUs.

In early 2015, during a meeting with members of the Congressional Black Caucus, President Obama expressed what many members later told the NNPA Newswire was a lack of support for HBCUs. President Obama was critical of HBCU graduation rates and loan policies.

In February 2015, President Obama’s own HBCU Board of Advisors Chair, Hampton University President Dr. William Harvey, was critical of the Obama Administration.

“We are not consulted when it comes to policy changes and decisions impacting – in a major way – the institutions on whose behalf we are to advocate,” said Harvey. “It happened with Pell. It happened with Parent PLUS. And, now it is happening with the new community college initiative.”

Regarding their visit to the White House on Monday, that included seeing President Trump and Vice President Pence, many HBCU presidents said they were happy to see HBCUs receiving attention within the first 100 days of Trump’s presidency, but they were cautiously optimistic.

“There was very little listening to HBCU presidents today. We were only given about two minutes each, and that was cut to one minute, so only about 7 of maybe 15 or so speakers were given an opportunity today,” wrote Dillard President Walter Kimbrough detailed in a column posted on Medium on the night of February 27.

The HBCU presidents convened at the Library of Congress on February 28 for an all day session with members of Congress.

Lauren Victoria Burke is a political analyst who speaks on politics and African American leadership. She is also a frequent contributor to the NNPA Newswire and BlackPressUSA.com. Connect with Lauren by email at LBurke007@gmail.com and on Twitter at @LVBurke.