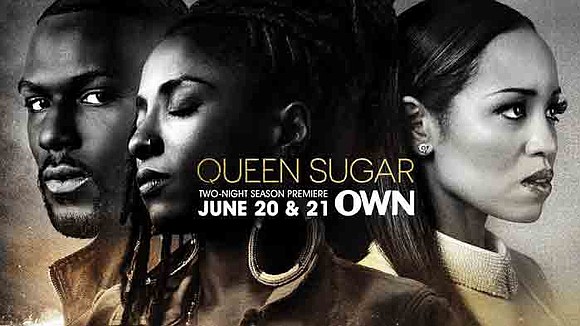 OWN’s “Queen Sugar” is now in its second season and it promises to be impactful, tantalizing, and well worth watching.

This tender, sophisticated drama tells the story of the Bordelon family, young adults trying to make sense of their lives and the directions they hope to take while fighting to maintain the family unit as a whole. Family members are striving to honor the legacy of their father who died without warning, leaving them a sugar cane plantation and the hope that despite all the set-backs it will prove to be the legacy he hoped for his children.

Here is Season two’s jumping off point; Charley (Dawn-Lyen Gardner, “Unforgettable”) relocates to Saint Josephine, La., to help run the family business. As the only Black female sugarcane mill owner, she must fight to regain her independence while rebuilding her relationships with her estranged siblings. Ralph Angel (Kofi Siriboe, “Girls Trip”) struggles to transform from a formerly incarcerated single father to a land owner in the eyes of his family as he works to restore his relationship with his son’s mother. Nova (Rutina Wesley, “True Blood”) finds herself torn between her activism and her desire to be loved. Together, they must learn to rely on one another as they navigate their tenuous bonds as family.

I was simply haunted by the second season opener when Charley’s teenage son, Micah, (Nicholas L. Ashe) was stopped by police while driving his spiffy new car given to him by his father, pro basketball player Davis West (Nicholas L. Ashe).

Micah didn’t have the proper credentials so he was taken to jail. It was a shattering experience for the young man, so much so that he urinated on himself. My heart broke and then I thought about the young Black men and women who in reality share his fate.

The young man handled the situation with dignity, although he was hurt. I thought it sent a powerful message to parents and teens. And I realized is a sense, that’s what “Queen Sugar” is all about; giving the viewer another point of view that leads to a life well-lived and not always about death and mayhem.

Oprah Winfrey (executive producer), and Ava DuVernay (creator and executive producer) of “Queen Sugar” broke new ground last year when they hired women of all nationalities to direct all the episodes of the first season, and they are doing it again for the second season.

In a recent LA Times report by Meredith Blake, DuVernay said, “I wanted people with my sensibility, who care about the things I care about. People who make films that I love and I knew would embrace the luxurious pace and the attention to detail and the love of nuanced characters.”

Recently, Winfrey and DuVernay hosted an event for journalists promoting “Queen Sugar” and the thinking behind it. Squarely supported by Winfrey, DuVernay is giving female filmmakers the opportunity to direct for TV.

According to the LA Times, season two is no different. DuVernay is determined to give more women—especially gay women and women of color—the chance to work. Instead of going through the typical Hollywood channels, she sought filmmakers whose work inspired her over the years, even resorting to tracking people down via Twitter.

Telling stories that tap into everyday life—good and bad—only makes for good storytelling, especially when it comes from diverse ‘voices’ or ‘voices’ you’ve never heard from before.

“For us, this is not a trend, this is not a publicity stunt. This is our choice,” says DuVernay, contrasting “Queen Sugar” with shows like “Game of Thrones” that receive little scrutiny despite their all-male director lineups. “Just like it’s their choice never to think about hiring a woman.”