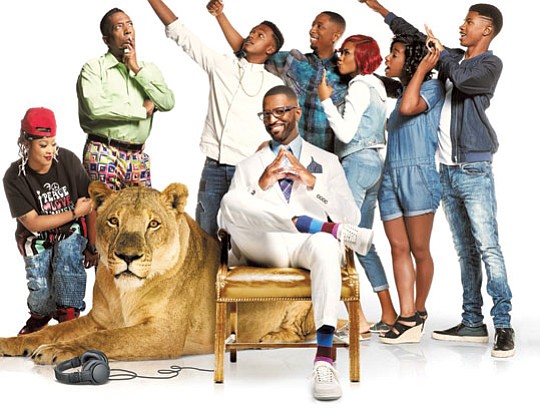 TV One’s “Rickey Smiley For Real” reality show kicked off its fourth season last week, setting the tone for what promises to be an exciting, funny, outrageous and thought provoking year for this record-breaking show.

Smiley is a comedian, television host, and movie star. He’s also a top-rated syndicated radio personality. “The Rickey Smiley Morning Show” is heard across the nation in 60 cities. From political, celebrity and entertainment interviews to rearing six young adults on his own, this funny man has a lot to say and share.

Smiley unabashedly says his radio and reality TV program is geared for people 8 to 80 years old … and beyond 80 in my opinion. He uses terms like ‘teachable moments’ where he can bring wisdom to the table, or spiritual advice that could help ease the burden of whatever is a troubling subject. Coupled with outlandish humor, meaningful conversation will take place on his radio and reality TV show.

Rickey’s parenting skills will be put to the test, no doubt.

TV One says, this season “Rickey Smiley for Real” covers the changing dynamics as Rickey Smiley works to balance a family of growing, opinionated young adults while expanding his entertainment empire by directing a sitcom and creating/hosting a game show. Various relationships will be revealed and tested throughout the season. To break this last sentence down … Smiley may be looking for love.

Smiley has dedicated watchers and listeners who don’t hesitate to voice their opinion regarding what takes place on the show. Smiley recently had to address a statement made by his son, Malik, regarding dating outside of one’s race, and how he views Black women. The scene created a strong conversation on social media regarding whether the teen’s comments were an insult to Black women.

In an interview with TV One’s digital team, Rickey shared his surprise and disappointment on how Malik addressed the subject of interracial dating on the show. He admits that at 15, Malik is still learning, growing and sometimes people make mistakes when trying to express themselves.

“Had I been there, we would’ve had a conversation immediately. When I saw it when it aired, I was shocked,” said Smiley, who says the situation has been handled. “If anyone was offended, we apologize.”

“Rickey Smiley For Real” is as thought provoking as it is funny. No doubt with six young adults making their way through life, short-comings and misgivings will surely crop up.

Da Brat is the newest member of the radio team, and audiences will get to see another side of this so-called ‘tough as nails’ sister. Da Brat became the first female rapper to have a platinum-selling album. “Funkdafied” also hit number one on the R&B album chart, a staggering achievement for a debut release by a female rapper. Her journey didn’t end there. Da Brat, like Smiley will be able to lay down some ‘teachable moments’ as they share their powerful, personal life lessons.

After each episode of “Rickey Smiley For Real” check out Gary with Da Tea’s behind-the-scenes on the network’s YouTube channel and website at www.tvone.tv. Viewers can also join the conversation by connecting via social media on Twitter, Instagram and Facebook (@tvone.tv) using the hash tag #RICKEYSMILEYFORREAL.