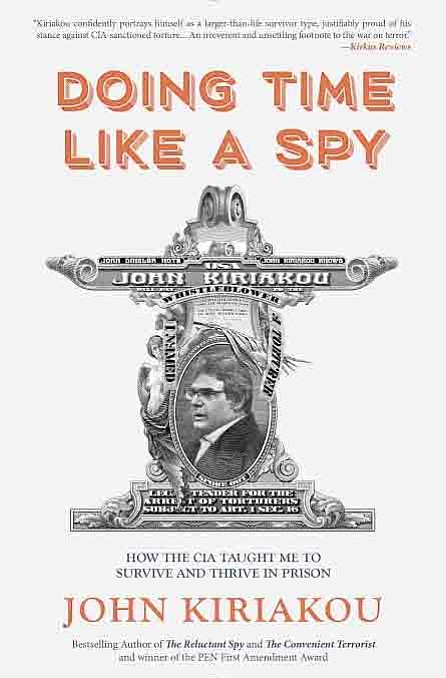 When former CIA officer John Kiriakou received 30 months in jail for exposing the agency’s torture program, he went into prison prepared to survive in hostile environments. But after his jail stint, he came out as a fierce critic of the correctional system. Kiriakou has since become an author, public speaker and is developing television shows in Hollywood.

Kiriakou details his experiences in his new book “Doing Time Like a Spy.” The book tells the odd stories of his prison experiences which included being singled out for protection by members of the Nation of Islam. Apparently, Minister Louis Farrakhan had been impressed by his attempts to expose human rights abuses against Muslims and ordered that he be treated well.

Kiriakou also became friendly with the Italian mobsters who were imprisoned at the federal correctional facility in Loretto, Penn. Apparently, they liked him because he was a CIA officer and not a FBI agent and historically the mafia and the FBI haven’t always been on favorable terms.

Kiriakou said his experience was unique because since his case was so high profile most of the prisoners knew who he was. However, some of them thought he was a CIA hitman. (He had actually been a case officer and analyst.) But the false rumor turned out to be an advantage because some Aryans decided to give him a wide berth, because they thought he was a killer.

In his book, Kiriakou singled out much of his criticism for the prison guards, who he described as poorly-trained, sociopaths who enjoyed inflicting pain and misery on the prisoners.

One of Kiriakou’s first letters to people on the outside revealed that two guards had tried to get him and another inmate to fight each other, which is a felony. (The letter was published in the Huffington Post and received one million views.)

“The worst thing about prison was the guards,” said Kiriakou. “It takes a special kind of sociopath to be a prison guard.”

He also pointed out that many of the guards were people who couldn’t make it on the police force or the military. The job’s only entry requirement is that the applicant has to be “working on a high school diploma.”

Kiriakou’s time in prison also exposed him to the failures of the War on Drugs.

“The War on Drugs has been an abject failure,” he said. “It specifically targets minority communities.”

He added that one of the biggest failures of the correctional system is that it focuses mainly on incarceration and offers few rehabilitation programs. However, Kiriakou said European countries, like Norway and Denmark, have proved that rehabilitation programs do work and are cheaper in the long run. If inmates receive education and work training, they are more likely to become productive citizens and not return to jail.

Kiriakou said New York has made steps in the right direction with a program that offers prisoners free college courses. Inmates can graduate from college debt free, and businesses are offered a tax credit if they hire them.

However, Kiriakou said there is little political will in Washington to spend money on rehab programs. He pointed out that one quarter of the Department of Justice’s budget goes to the Bureau of Prisons.

“Republicans don’t want to seem weak on crime,” he said.

Kiriakou was also critical of Attorney General Jeff Sessions, who seems to be determined to restart the War on Drugs, especially mass incarceration for drug use.

“Jeff Sessions is leading the country down the road which everyone knows is a failure,” said Kiriakou.