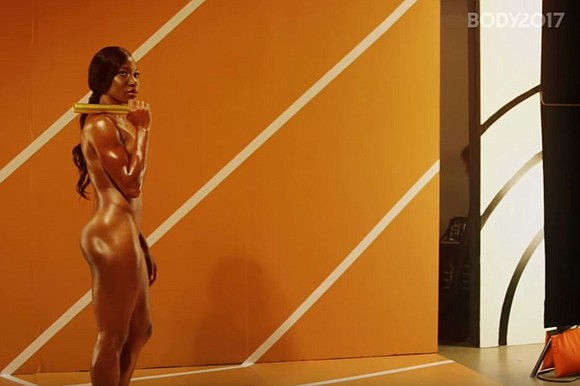 ESPN The Magazine’s Body Issue highlights the strength of professional athletes through a series of nude photos, EURweb reports.

Previews of the 2017 issue include tennis player Caroline Wozniacki leaping powerfully with her racket and football player Ezekiel Elliott in mid-running motion. These photos are meant to show the tenacity of the athletic form.

But for Olympic medalist and sprinter Novlene Williams-Mills, her personal athletic journey made it harder to stay tenacious.

Daily Mail reports that Williams-Mills of Jamaica is the first breast cancer survivor to be featured in the Body Issue. After competing in the 2004 and 2008 Summer Olympics in Athens and Beijing, she had her eyes set on the London Games in 2012. But just months before the event, she was diagnosed with breast cancer, a disease that affects 246,660 women and 2,600 men in the United States every year.

In fact, Williams-Mills competed for her spot on the Jamaican 2012 Olympic team just days after receiving her breast cancer diagnosis.

Williams-Mills told ESPN that she felt “betrayed” by her body, having taken care of it throughout her life and athletic career.

“You know when you tell a friend something and they betray you?” she said. “That’s how I feel. Like this thing just stabbed me right in the back. Like it just didn’t care who I was. It just wants to take control of everything and didn’t ask permission. It didn’t know that I have things to do.”

Despite her sudden diagnosis, Novlene Williams-Mills still competed in the 2012 Olympics, winning a bronze medal for Jamaica in the 4×400-meter relay. She had surgery right after the games. In fact, according to ESPN, she had four surgeries in total and continued to win races. In a statement to ESPN, she said that her cancer was a lesson in accepting your body — scars and all.

“Some experiences, when you get to the other side, you get back to the person you want to be,” she said. “You look in the mirror and you see all these scars. This is a body that you’re used to so much and then one day you have all these scars on your body. And, you know, that’s your story. I had to be like, ‘This is who I am now. These are the scars that make me up.'”

Williams-Mill joins other professional athletes like Lance Armstrong, Arnold Palmer, and Shannon Miller, all of whom have survived cancer. While physical activity has been shown to decrease cancer risk, there is no perfect formula for escaping this disease. In her statement to ESPN, Williams-Mills told those who are fighting adversity, like a cancer diagnosis, to continue to push forward and be strong.

“No one else can tell you how to fight your battle,” she said. “All I can say is, when you feel like giving up, just push a little bit harder. It’s not going to be easy. You’re going to have rough days. But giving up is easy. Fighting every single day is harder. I have to be that survivor of my own battle. I have to be a survivor of cancer.”