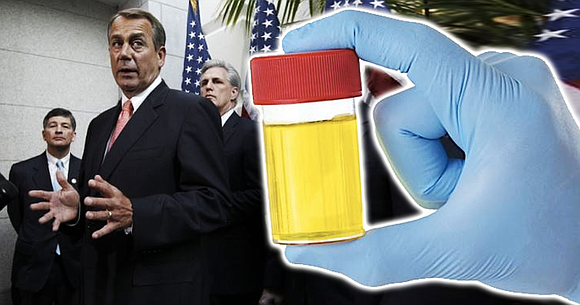 According to a new HuffPost/YouGov poll, 64 percent of Americans favor requiring welfare recipients to submit to random drug testing — a measure pushed by Republican lawmakers in recent years — while 18 percent oppose it. But an even stronger majority said they’re in favor of random drug testing for members of Congress, by a 78 percent to 7 percent margin. Sixty-two percent said they “strongly” favor drug testing for congressional lawmakers, compared to only 51 percent who said the same of welfare recipients.

The House of Representatives passed legislation this year that would allow states to require food stamp recipients to pee in cups to prove they’re not on drugs. In 2012, Republicans pushed for drug testing of people seeking unemployment insurance benefits when they lose their jobs. At the state level, GOP lawmakers across the country have sought drug testing for an array of safety net programs. (Politicians sometimes refer to means-tested government benefits in general as “welfare,” although the term is more commonly a nickname for the relatively small Temporary Assistance for Needy Families program.)

While drug testing for both welfare recipients and lawmakers received support across party lines in the new poll, the congressional proposal was the one more likely to bring Americans together. Eighty-six percent of Republicans, 77 percent of Democrats and 75 percent of independents said they want drug testing for members of Congress.

If a member of Congress is caught using illegal drugs, as Rep. Trey Radel (R-Fla.) was in late October, Americans expressed little inclination to show mercy. Sixty-six percent said that a member of Congress convicted of possessing a small amount of cocaine should be forced to resign, while only 14 percent favored allowing the convicted member to serve out the remainder of his or her term.