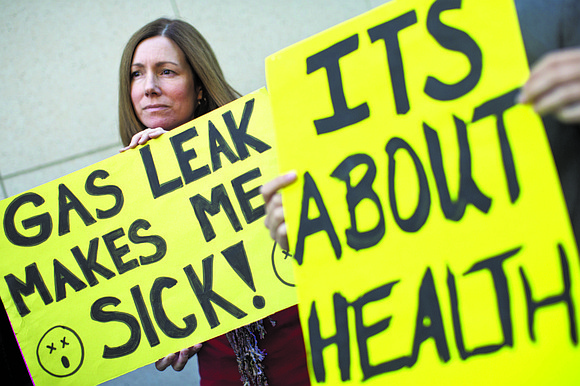 For the fourth consecutive day, Southern California Gas Co. crews withdrew natural gas from the troubled Aliso Canyon storage facility, saying the move was necessary to keep up with increased demand created by the cold weather gripping the region.

SoCalGas made withdrawals from Aliso Canyon on Tuesday for the first time in more than a year. The storage facility near Porter Ranch has been largely shuttered since a massive four-month leak that spewed about 109,000 metric tons of methane into the air and led to the temporary relocation of about 7,000 residents.

With cold weather continuing into the weekend, SoCalGas officials this morning again drew natural gas from the facility.

“This morning’s customer demand illustrates the sudden peaks we regularly experience with changes in the weather,” according to SoCalGas. “We work with the California Independent System Operator and our customers to manage these changes in demand on an hourly basis to prevent curtailments or service interruptions.”

Utility officials said the withdrawals were done in compliance with state regulations and restrictions on Aliso Canyon imposed by the California Public Utilities Commission.

The utility issued an advisory warning to its customers earlier this week, urging people to curtail gas usage when possible to prevent shortages during the cold snap. That advisory remains in effect, with customers urged to lower thermostats to 68 degrees or lower, delay the use of natural gas appliances and wash clothes in cold water when possible.

Gas Co. officials noted that further withdrawals of gas from Aliso Canyon might be necessary depending on weather conditions.

SoCalGas is hoping to resume injecting natural gas into the Aliso Canyon facility, but a final decision by state regulators on that proposal won’t be made until after a pair of public hearings are held next month.

Some residents and activists on Tuesday criticized the utility for making withdrawals from Aliso Canyon, suggesting the move was done to pressure state regulators to allow a re-start of the facility. Gas Co. officials

rejected the allegation, insisting the withdrawals were demand-driven.