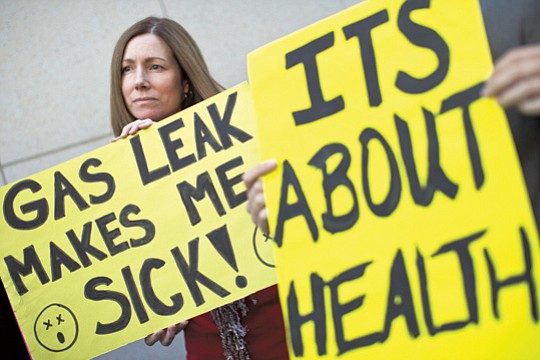 State regulators this week issued a series of proposed regulations under which Southern California Gas Co. would be able to resume injecting natural gas into the Aliso Canyon storage facility, but at reduced amounts and lower pressure levels than the Gas Co. requested.

A final decision on whether the injections can resume will not be made until after a pair of public hearings are held next month, allowing residents to comment on the proposed safety procedures and operating restrictions.

The state Division of Oil, Gas and Geothermal Resources (DOGGR) concluded in a letter sent to SoCalGas that the utility has either completed or was on track to complete the steps required by state law and the governor’s office before natural gas injections can resume at the Porter Ranch facility—site of a four-month gas leak that spewed 109,000 metric tons of methane into the air and forced thousands of residents from their homes.

“We want to hear the public’s thoughts on the testing and inspections, and the steps being taken to ensure public health, safety and environmental protection,” said Ken Harris, the state’s oil and gas supervisor and director of DOGGR. “`We are responsible for ensuring that if the facility reopens, the wells are safe.”

According to state regulators, 34 of the 114 wells at the facility have passed a series of safety tests, indicating they can be safely used to again inject natural gas into the storage facility. The other wells have been taken out of service, and they must pass all safety tests within one year or be plugged. One of them is already being tested.

The state is also proposing a maximum pressure level of 2,926 pounds per square inch—below the 3,595 proposed by SoCalGas. Regulators concluded that the lower-pressure recommendation “provides an important margin for well control and safety at this point in the well-evaluation regime.”

The public hearings on the proposed regulations will be held from 5:30 to 9 p.m. Feb. 1 and Feb. 2, both at the Trillium Room of the Hilton Woodland Hills, 6360 Canoga Ave.

Many Porter Ranch-area residents have been pushing for the full closure of the Aliso Canyon facility. Many residents who were displaced from their homes for several months or complained about health problems from the massive leak are also suing SoCalGas.

A judge in November approved a settlement that resolved criminal charges against SoCalGas, with the utility pleading no contest to a misdemeanor count of failing to immediately report the leak, which began Oct. 23, 2015 and was capped in mid-February 2016.