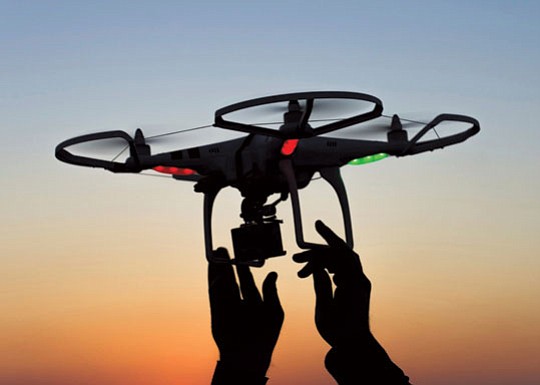 Activists this week called on the Los Angeles County Board of Supervisors to ban the sheriff’s use of a drone, which the county’s top cop said he plans to use in search-and-rescue, bomb detection, hostage situations and other critical incidents to keep the public and deputies safe.

Protesters—gathered on the steps of the county Hall of Administration to launch a Drone-Free LASD/No Drones, LA! campaign—said use of the unmanned aerial craft is a “giant step forward in the militarization of local law enforcement” and called on the supervisors to intervene.

Citing a long history of mistrust between the Sheriff’s Department and the communities it serves, coalition members said they had no confidence that the LASD would limit the use of the technology and respect privacy rights.

Garcia noted that the department had experimented with the use of civilian aircraft for surveillance in Compton in 2012 without informing residents or even that city’s mayor.

An LASD sergeant acknowledged to the Center for Investigative Reporting in 2014 that the operation was kept quiet to avoid complaints.

In 2014, LAPD Chief Charlie Beck said he was unwilling to trade public confidence for the advantages of drones, although he suggested at the time that his department might use them in the same kind of tactical situations now mentioned by the Sheriff’s Department.

Coalition spokesman Hamid Khan said there were no circumstances under which the group would condone the use of drones.

“For us ... it is completely a non-starter,” Khan told reporters. “We know how policies are violated.”

“We know that mission creep is real,” Khan said.

“The dangers of law enforcement can never be eliminated. However, this technology can assist us in reducing the impact of risks on personnel and allow us to perform operations to enhance public safety,” McDonnell said last week at a news conference to announce his planned drone use.

The drone can gather otherwise inaccessible information and give deputies the ability to make better choices, the sheriff said.

In a letter intended for the Board of Supervisors, the group said the LASD’s tips and leads program, initiated as part of the agency’s counterterrorism efforts, “has evolved into LASD’s insidious tool for everyday policing.”