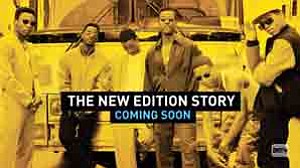 TV host, producer, and radio personality Tanya Hart had the foresight to agree when New Edition music producer Maurice Starr, asked her to do a story about the group in 1982 on her popular Boston television show, WBZ-TV’s “Coming Together.” This exposure helped launch New Edition into a 30+ year career which has yielded Bell Biv Devoe, hit records, numerous awards and now a biopic on BET entitled “The New Edition Story.” The three-part series premiere airdates are Tuesday, Jan. 24 through Thursday, Jan. 26. The miniseries chronicles the ups and downs of legendary music group New Edition from their humble beginnings in Boston to individual solo success.

Tanya Hart reveals, “Maurice came up with the idea to do a “Hollywood Talent Night”. He and I would often share M.C. duties at the Lee School in Dorchester and since I had a weekly prime time TV show, we could showcase the winners. Boston was bursting with raw talent and getting national play with groups like “The Cars” and “Aerosmith,” so when five Black kids from Roxbury appeared on my TV show, everyone took notice, and the rest as they say is history.”

Maurice eventually lost New Edition to MCA Records. He licked his wounds at Tanya and Philip Hart’s Martha’s Vineyard home one cold winter. There he had an epiphany. He told himself if I can find five Black kids from Roxbury and make them stars, then I can find five White kids and make them even bigger stars. Maurice came back to Boston and with the help of talent scout Mary Alford found break dancer Donnie Wahlberg who brought four of his teen friends to meet Maurice. Soon these five White teenagers from Dorchester and Jamaica Plain hit it big as New Kids on the Block. As with New Edition, New Kids on the Block made their TV debut on Hart’s ‘Coming Together’ program. Using what he learned from Maurice, Donnie and his younger brother Mark created Marky Mark and the Funky Bunch. Mark Wahlberg is now an A-list movie star and producer.

The men of New Edition and New Kids on the Block still appreciate and acknowledge the important role Hart played early in their careers. Maurice and Donnie even collaborated with Tanya in writing ‘So in Love with You’ which is on ‘Tanya Hart Sings’ available on cdbaby.com, iTunes, Spotify, and other streaming services.

Hart went on to set up BET’s West Coast studio operations and its first program ‘Live from LA with Tanya Hart’ at the request of BET founder Bob Johnson in 1990. Hart continues her work as co-chair of The Caucus for Producers, Writers and Directors, becoming the first woman and first African American to lead this influential cross guild trade organization. During her career, Hart has won Emmy awards, Peabody awards, Ohio State awards, and other recognition for her work in television, radio, film, music and humanitarian endeavors.