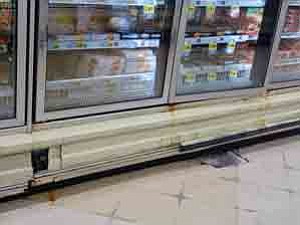 Members of the community are outraged after pictures posted on social media showed that a Gramercy Park Ralphs Grocery store is being kept in “filthy” condition.

The photos, posted by community member Kandice Hill, were taken at the Ralphs located at 1730 W. Manchester Ave. on Jan 4. and later posted to her Facebook page. The post has sense been shared thousands of times.

“It’s filth, its grime ... it’s beyond unsanitary,” she said in the post. “There’s so much stuff you can’t tell if it’s rodent droppings or mold ... it’s probably both.”

Hill said she contacted the Los Angeles County Department of Public Health to report the condition of the supermarket.

The way the store is being kept is “not something we are proud of,” said Kendra Doyel, spokesperson for the grocery chain. It was something that immediately when brought to our attention we wanted to make sure and remedy,” she continued.

The store is reportedly scheduled for a remodel and passed a health inspection just last week.

But members of the community feel that the store is kept under such conditions because of the lack of regard for people in the neighborhood.

Some locals reportedly drive miles away to shop in more affluent parts of town.

The matter will be further discussed at an upcoming Southwest Neighborhood Council Meeting on Jan. 23 at the Constituent Service Center, 8475 S. Vermont Ave. at 6 p.m.