The CBC places Blacks in power on Capitol Hill 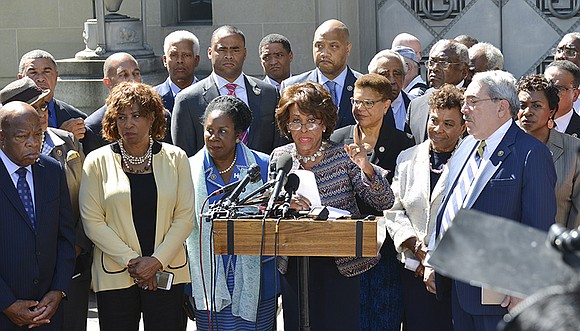 In early December, the Joint Center for Political and Economic Studies led by Spencer Overton, released a devastating report on staff diversity in the United States Senate.

“African-Americans make up 13 percent of the U.S. population, but only 0.9 percent of top Senate staffers,” the report found.

The Joint Center was careful to focus on senior staff positions in their Senate staff study. On January 5, the National Urban League will host a forum on Senate staff diversity on Capitol Hill. The only good news regarding the numbers on Black staff in the halls of power in Capitol Hill is on the House side.

In July, Republican House Speaker Paul Ryan posted a photo on Instagram of over 70 Capitol Hill interns and not one was African American. Internships and fellowships on Capitol Hill are a key pipeline to building leadership experience in the halls of power.

Speaker Ryan’s Instagram image was a jarring visual of what many have known on Capitol Hill for years: That the staffs and the pipelines to get to power and be positioned for decision-making roles remains overwhelmingly White. Ironically, Ryan will have a Black Chief of Staff, Jon Burks, starting this month.

It matters who serves in the very top jobs: Those in senior staff positions have a major say in policy decisions and advise lawmakers directly. Chiefs of Staff and other senior staff members often move on to powerful well paying jobs in the private sector.

On Capitol Hill in Washington, D.C., just as in most places where there are budgets allocations to be decided on and jobs to fill, the person who makes the decision on those matters is the person with the most power and that often is not only the elected official, but also their Chief of Staff. The Chief is also the gatekeeper for resumes and hiring staff. A typical Chief of Staff on Capitol Hill earns between $120,000 and $168,000.

The conversation on hiring has been going on for years, but it was crystalized by the detailed report by the Joint Center for Political and Economic Studies.