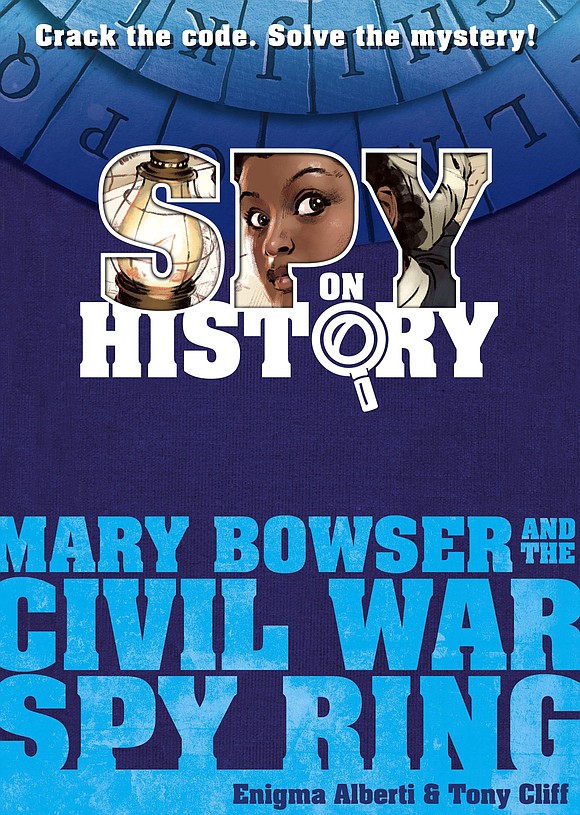 You’ve seen a lot of things you weren’t supposed to see.

Some might call you “snoopy.” Others might say you’re “nosy,” but you understand that keeping your eyes open, finding information, and knowing what you’re not supposed to know can sometimes be a good thing. And in the new book “Spy on History: Mary Bowser and the Civil War Spy Ring” by Enigma Alberti & Tony Cliff, sleuthing and snooping can change history.

Bet Van Lew knew that what she was about to ask of Mary Bowser was huge.

Once a slave owned by Bet’s family, Mary had given Bet many things through the years; when Bet freed the Van Lew family’s slaves, Mary kept in touch with her Quaker friend, who had ensured that Mary got a good education. Theirs was a strong bond, but Bet now had a problem.

She was pulling together “a network of spies” to help Union forces in the Civil War. Bet knew that with Mary’s schooling and smarts, Mary would be the right person to gather intelligence inside the Confederate White House, where President Jefferson Davis lived with his family. Bet had to ask for help.

Every enslaved person in the South needed Mary.

It would be dangerous. Mary had to keep to herself and pretend that she wasn’t very smart, and that she couldn’t understand writing or maps. She memorized every scrap of information she found, then she snuck the information out of the Davis household and into the hands of the people it would help.

But she had to be very careful: getting caught could mean getting caught by the neck at the end of a rope because the Confederacy was quick to punish spies with death.

Could Mary find the most important clues of all before someone saw her spying?

Loosely based on a real person and a true story, “Spy on History: Mary Bowser and the Civil War Spy Ring” is a story that’s as exciting as they come. I have to admit, I was breathless.

Even though your child might sense that things will resolve positively by the end of this story, authors Enigma Alberti (a “nom de plume”) and Tony Cliff surely raise a kid’s adrenaline with a plot that both thrills and teaches. Yes, part of this tale is fictionalized but Mary – who actually existed, as did all of the people in this story – is a great role model; her bravery, wisdom, and (according to the authors) her smooth transition to post-war life is absolutely inspirational. What will further hold a young reader’s imagination is the mystery woven inside the story itself; there are clues all over this book – even inside the title page! – and a side-story whodunit that’s just plain fun.

This is a great introduction for Civil War buffs-in-the-making, young biography fans, and kids who are just learning to appreciate thrillers as a genre, so get “Spy on History: Mary Bowser and the Civil War Spy Ring.” This is something your 7-to-11-year-old will want to see.