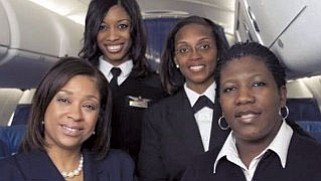 Inspired by the real life story of the first all African American females to crew a commercial flight, “Fly” chronicles the professional, family, and love lives of four young Black women living in Atlanta in 2009.

As the foursome navigate their tumultuous personal lives while working for a commercial airline, they shatter the glass ceiling of racial stereotypes and redefine what it means to be a woman in the not so friendly skies. Tatyana Ali leads an all-star cast that includes show creator, Rae’Ven Kelly, Ella Joyce, Glynn Turman, Gary Le’Roi Gray, Angela E. Gibbs, Ashley Monique Clark, and to recur TV Icon Marla Gibbs. The show will reunite Ali with her former Fresh Prince co-star, Karyn Parsons, who will recur. The pilot will feature cameos from all four original crew members: Captain Rachelle Kerr, First Officer Stephanie Brown-Grant, and flight attendants Robin Rogers and Diana Galloway who literally flew into Black/Women’s history on Abraham Lincoln’s Birthday in Black History Month, February 12, 2009.

The series creator, Rae’Ven Kelly, is a newcomer to the writer’s room, but is a longtime veteran of the large and small screen. Kelly grew up in the industry as an award-winning actress and has been honored multiple times by The Hollywood Reporter for her work. Some of her most memorable roles include: portraying Samuel L. Jackson’s daughter in Warner Bros’ hit movie “A Time to Kill” directed by Joel Schumacher; a young Tina Turner in ‘What’s Love Got to do With it?” with Angela Bassett and Laurence Fishburne; Whoopi Goldberg’s daughter in Rob Reiner’s “Ghosts of Mississippi” with Alec Baldwin; and as the best friend of Grammy Award winner LeToya Luckett in “Preacher’s Kid.” Kelly’s TV credits include: ‘Buffy the Vampire Slayer,” “Hannah Montana,” “ER,” “Touched By An Angel,” “Living Single,” “Roseanne,” “I’ll Fly Away,” and a host of others.

Kelly’s production company, Everlasting Entertainment, has been developing the series and is fielding offers from select networks.