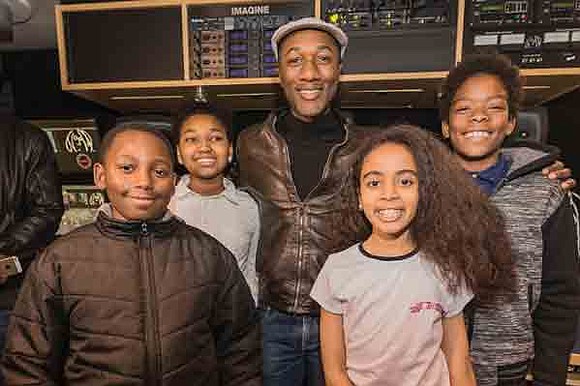 Blacc started off his visit by providing singing and songwriting lessons to a cluster of talented singers. He later joined a separate group of keyboardists, percussionists, and saxophone players who gathered to participate in a soulful jam session on board the John Lennon Educational Tour Bus.

The vehicle is a non-profit, state-of-the-art mobile audio and high definition video recording and production facility. In its 20th year, the bus travels the country offering the lastest technology and gear, and continues to be dedicated to providing young people with tours of the Los Angeles-area studios and participation in free digital media production workshops. Assisted by three on-board engineers, students can learn how to write, record, and produce original songs, music videos, documentaries, and live multi-camera video productions streamed to the web in real-time–all in one day.

Blacc shared his thoughts regarding the effects of music on a child’s development.

“Music had a tremendous impact on my youth,” Blacc explained. “It allowed me to explore my creativity and expand my imagination. I used it to create my own story.”

“It’s [music] a great community activity. I make a personal effort to find and contribute to organizations that have a foot in the community where kids need resources that will help nurture their abilities and guide them down a path to success.”

As a non-profit entity, The Pullum Center offers quality arts instruction after school to underserved students in South Los Angeles, and participants are equipped with valuable tools to help them build self-esteem, develop civic responsibility, and excel in the classroom. The program has provided musical training to more than 650 children and young adults, explained founder Fernando Pullum, who keeps the center’s doors open by collecting donations from various supporters within the community.

“It’s an environment where kids can hone their skills, or discover skills they never knew they had,” added Pullum. “This program, and others like it, are important because they provide structure and purpose to the lives of young people, and it keeps them off the streets. That’s very important to me.”

Despite a difficult childhood growing up on Chicago’s Westside (his parents were involved in various illicit lifestyles), in the city’s toughest neighborhood, Pullum earned his bachelor’s degree in music education and master’s in trumpet performance. He moved to Los Angeles in 1984 to follow his dream of becoming an educator and professional musician. In 2012, he established The Fernando Pullum Community Arts Center, and it has since earned the respect and admiration of renowned instrumentalists and entertainers.

During the jam session, each participant was given an opportunity to perform in a state-of-the-art recording studio. Surrounded by a small fleet of photographers and journalists, the youngsters received approximately five minutes to display their talents.

“Music has been a good friend to me,” said Blacc as he watched a pint-sized, curly haired third-grader tune the strings of her guitar. “I couldn’t dream of a world without it.”