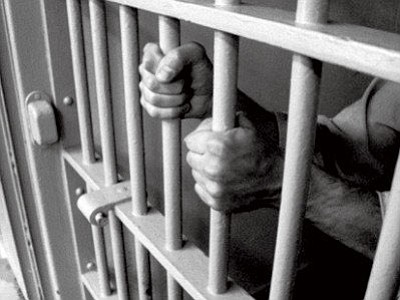 An inmate serving time at a Lancaster prison for manslaughter and attempted murder in San Diego County allegedly attacked and injured two guards.

Calvin Glass, 20, “became aggressive toward (a) correctional officer about 11 a.m. Jan. 29 at California State Prison-Los Angeles County, according to the California Department of Corrections and Rehabilitation.

“The officer ordered Glass to submit to handcuffs, but the inmate did not comply and attacked the officer, according to a CDCR statement. “He grabbed the officer around his torso and threw him to the floor, but the officer managed to get onto his feet and utilized his baton to quell the attack.

Other officers responded and subdued Glass, who was placed in handcuffs. He was not injured.

“Both officers are recuperating at home and expected to make full recoveries, the statement said.

Glass, of Oceanside, was sent to the prison last June from San Diego County to serve a 21-year sentence. He pleaded guilty to voluntary manslaughter in the July 2015 death of 18-year-old Jordan Luis and attempted second-degree murder for shooting 19-year-old Julius Lowe, the deceased man’s friend, in the neck.

Authorities said the shootings stemmed from a simmering conflict between Glass and Luis, who were roommates in a transitional housing program for young people who have aged out of the foster care system.