Harvey strikes Houston as thousands of citizens scramble to safety 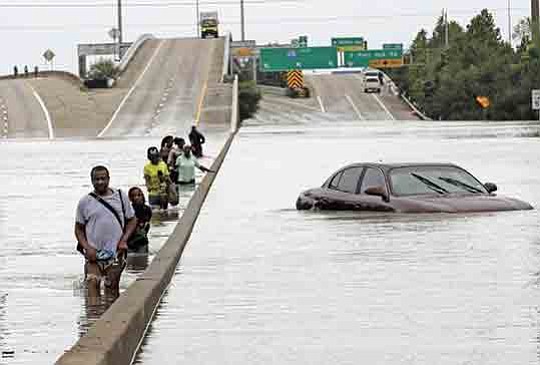 The biggest rainstorm in history to hit the U.S. mainland made a second landfall on Wednesday on the Gulf Coast, and is slowly moving away from Houston, Texas while inundating the southeast portion of the state and southwest Louisiana.

Now categorized as Tropical Storm Harvey, it is expected to weaken today as it moves north toward Mississippi and Tennessee as the National Hurricane center warned mid-week of “catastrophic and life-threatening” flooding. At press time, more than 20 persons were reported dead and tens of thousands of people in Houston and across southeast Louisiana have had to evacuate their homes. Officials fear many more fatalities as the waters recede in the coming days.

In Beaumont, Texas, about 85 miles east of Houston, a mother and child on Tuesday were swept away by high floodwaters after exiting their car near a flooded freeway. Witnesses reported the child clinging to its mother before police officers and fire rescue divers spotted them. The mother died and the child is listed in stable condition. A family of six is feared dead as violent floodwaters engulfed their vehicle as it left Houston and was pitched forward into the nearby Greens Bayou. Also, Sgt. Steve Perez, a 34-year veteran of the Houston Police Department, was drowned during the first 48 hours of the hurricane after tying to get to work through an underpass during the darkness.

Harvey is moving closer to neighboring Louisiana which this week will mark the 12 anniversary of Hurricane Katrina. New Orleans is still recovering from flooding after thunderstorms this month overwhelmed the city's drainage system.

Houston Mayor Sylvester Turner said there are more than 9,000 evacuees at the city's George R. Convention Center and more can be expected to converge at the Toyota Center, NRG Stadium and at various college university campuses.

“[Earlier] our focus was on rescue, and today our focus remains on rescue,” Turner said this week. “We are not turning anyone away from our shelters.” Turner said he has made an official request to FEMA for supplies, cots and food for an additional 10,000 evacuees. A midnight-to-6-a.m. curfew is in effect for Houston and surrounding suburbs.

President Donald Trump and First Lady Melania Trump visited Texas on Tuesday and promised swift federal aid. Since Hurricane Harvey made landfall on Aug. 25, more than 50 inches of rain has fallen, an amount representing more precipitation that the region usually sees in one year. In the suburb of Mt. Belvieu, just east of Houston, more than 52 inches of rain has been recorded since the storm blew in, breaking the highest previous record of 48 inches from 1978's Tropical Storm Amelia in Medina, Texas.

The disaster relief effort was well underway this week as celebrities ranging from pop star Beyonce, a Houston native, comedian Kevin Hart, and J.J. Watt of the Houston Texans have pledged financial assistance. Watt established a crowdfunding page to raise money, and then donated $100,000. At press time the amount of money raised was approaching $2 million.

“Our hearts go out to everyone in the devastating path of this historic storm,” said Disney Chairman and CEO Robert Iger. “It's hard to fully appreciate the impact, in part because it isn't over yet. But we know thousands of people have lost everything and now face the daunting challenge of putting their lives and communities back together...”

In Santa Monica, MusiCares, the philanthropic arm of the Recording Academy, announced the establishment of a relief fund to support members of the music community affected by Harvey.

Assistance will include basic living expenses such as shelter, food, utilities and transportation; medical expenses, including doctor and hospital bills, and medications; clothing; instrument and recording equipment replacement; relocation costs; home repairs; and debris removal, according to the charity.

“Now is a time when we must come together and take care of those who need help, as we are only just beginning to understand how life-altering Hurricane Harvey will be for its victims and their communities,” said Neil Portnow, president and CEO of the Recording Academy and MusiCares. “It's important that we step up and support the creative community, and take action to provide immediate assistance to members of our music family.”

The Recording Academy has also implemented a Hurricane Harvey employee donation program, which matches donations made by its staff dollar-for-dollar up to $20,000.

At Ralphs and Food 4 Less stores in Southern California, hurricane relief donations from customers are being accepted through Sept. 9 at special-marketed coin boxes located at the checkstands. All monies collected will be forwarded directly to the American Red Cross for relief efforts tied to the hurricane that has battered southeast Texas this week, company officials said.

“Our customers and associates have always responded generously to help those in need, particularly when disaster strikes,” said Valerie Jabbar, president of Los Angeles-based Ralphs. “Every contribution will help the Red Cross provide emergency assistance to the victims of this devastating storm.”

The charitable arm of the supermarkets' parent company, The Kroger Co., is making a $100,000 commitment to the Houston Food Bank. And Ralphs and Food 4 Less are also inviting their 30,000 associates to join the cause, as well as support fellow Kroger associates in the Houston area affected by the storm, through Helping Hands, an internal fundraising effort, according to company officials.