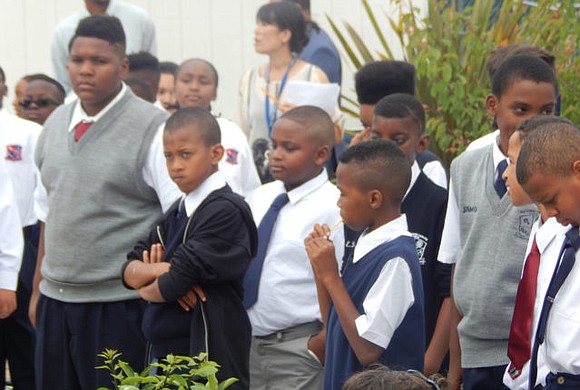 Washington Preparatory High School has started in a new academic direction at the storied South Los Angeles secondary campus that everyone seems to be excited about. Borrowing from the past where high school consisted of multiple grades in a single setting, and encompassing a new focus on studying science, math and the arts, the school added a new academy tailored to sixth and seventh graders and plans to add subsequent levels until the students reach 12th grade.

But, unlike most configurations following this model, the Boys Academic Leadership Academy (BALA) which is located next to Washington High, is the first all-male school in the district and there are no requirements for students to meet a particular grade point average in order to enroll.

“We intend to use the entire school and community to teach project-based learning,” said Moorer.

Class will begin at 8:10 a.m. with libations each day in addition to about 10 minutes of positive reflection on what they are thankful for. Moorer said this is offered through a program called RICH—Respect, Integrity, Courage Humility.

The BALA program is modeled after the Eagle Academy out of the Bronx in New York, and there is an all-girls academy attached as well in Los Angeles.

Once BALA gets to the high school grades, the school will add a sports program to the curriculum.

But like the school itself, these will include non-traditional offerings such as golf and Lacrosse.

Additionally, to insure that the college-going environment is an intricate part of BALA, each boy will be matched with a mentor.

In terms of behavior, the school follows a restorative justice model that focuses on students understanding what they are doing.

Moorer and his staff, who he said are all on the same page when it comes to instruction, knows what they are is doing is different and will take getting use to, but current LAUSD board member and former Washington principal George McKenna as well as a number of other board members have already been out to the school to see how the program is working and are enthusiastic to see the results.