Dick Gregory: Home to the Ancestors 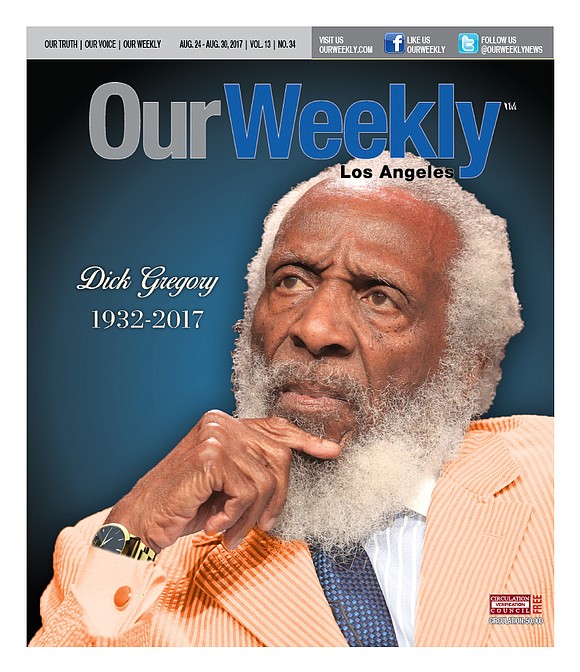 Ground breaking comedian, activist, and entrepreneur Dick Gregory has died at the age of 84 in Washington, D.C. He had been admitted to a hospital there for a bacterial infection a week prior. The cause of death was heart failure.

Gregory was the bridge between brilliant but little known jokesters like Redd Foxx, Moms Mabley, and Slappy White, who toiled in the obscurity of the “chitlin circuit,” and the young Turks of the 1960s and 70s, Marla Gibbs, Reynaldo Ray, George Wallace, and Flip Wilson, who enjoyed professional success with the loosening of social conventions in the second half of the 20th century.

His commentary, observations, and satire (largely on the touchy subject of race) were a radical departure from the buffoonery and minstrel show antics typical of Black performers during the “Golden Age of Hollywood” and the early days of television. Segueing his success as a performer into an effect role as an activist in the Civil Rights era, he also became noted as an advocate for dieting and health foods, and as a conspiracy theorist.

Most importantly, he provided the template for comedy as an instrument for social criticisms in use by those who followed.

Just the funniest guy on the block

“I never believed in Santa Claus because I knew no White dude would come into my neighborhood after dark.”

Born in St. Louis, Mo. circa 1932, Richard Claxton Gregory cultivated his comedic skills as a buffer to the harassment he suffered at the hands of other kids in his neighborhood. In a household of six children reared by a single mother, he once joked that stray food falling from the table would be consumed before it hit the ground.

Especially impoverished and needy even in the downtrodden ghetto, he was the blunt of merciless teasing and torment by his sadistic peers. Eventually he found that humor could gain him allies in a hostile environment.

He attended Sumner High School, the first high school for African Americans west of the Mississippi River. While there, he embarked upon the first event of a lifelong push for social justice when he led a march to protest segregated schools. The travails of growing up were eased by the mentorship of the faculty there, and he found sanctuary in the cross country and track teams.

A standout middle distance runner, Gregory received scores of scholarship offers before choosing to compete as a half-miler and miler at Southern Illinois University, with a break in his studies when he was drafted into the army.

“The ability to poke humor at the scared cows of our society is a healthy thing. Dick is saying the right thing at the right time.”

Moving to Chicago to pursue the stand-up comedy he’d taken up in the military, he gained a foothold performing at the many nightclubs in that city’s “Black Belt,” the predominately African American south side. In those days, adventurous Caucasians would venture into the area to sample Black entertainers, in much the same way that well-heeled Whites would go “slumming” into Los Angeles’ South Central to partake of the standout musicians performing there.