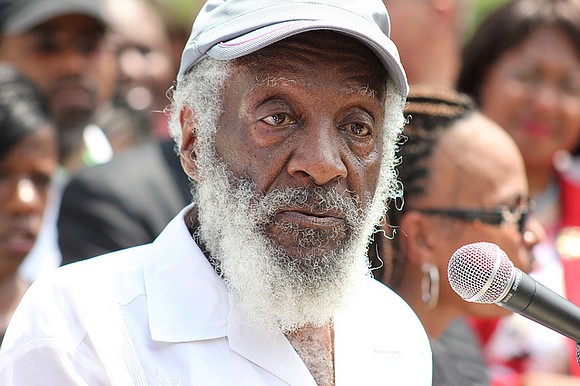 The entertainment world mours the Aug. 19 death of comedian and civil rights activist Dick Gregory in Washington, D.C. A statement was given by Ben Chavis, executive director of the National Newspaper Publishers Association:

“Gregory epitomized the rare combination of an intellectual genius and one of our greatest social visionaries. He was a pioneer of a unique brand of humor that broke barriers and defied racial stereotypes. As a civil rights activist, he worked on the frontline of the struggle for justice not only challenging socioeconomic and political disparities, but also fighting to empower the Black community.

In other news, TMZ reported that on Aug. 14 Robert Yancy, the only son of singer Natalie Cole, was found dead of an apparent heart attack at his Sherman Oaks apartment. He was 39. Natalie Cole died at age 65 on Dec. 31, 2015 of pulmonary arterial hypertension, which reportedly led to heart failure. Yancy’s father, music producer Marvin Yancy, died of a heart attack at age 34 in 1985. The younger Yancy, a percussionist and saxophonist, once toured with his mother and performed on her albums “Take A Look” (1993) and her 1997 release "A Special Christmas."

Tommy Hawkins, who was the first Black basketball player to earn All-America honors at the University of Notre Dame and who once played for the Los Angeles Lakers during a 10-year NBA career, died Aug. 16 at his home in Malibu. He was 80.

A 6-foot, five-inch forward, Hawkins was Notre Dame’s first African American basketball star. He was selected by the then Minneapolis Lakers in the first round of the 1959 NBA draft. Hawkins moved with the team to Los Angeles, also played with the Cincinnati Royals, and retired with 6,672 career points and 4,607 career rebounds.

Hawkins later worked in radio and television broadcasting before serving as vice president of communications for the Los Angeles Dodgers.