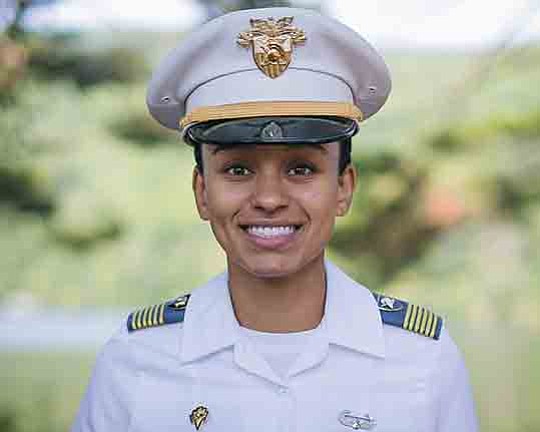 As First Captain, Simone Askew assumes the most prestigious position at West Point.

One central figure in the confrontation between Kim Jong Un and Donald J. Trump on the Korean peninsula is U.S. Army Gen. Vincent K. Brooks, who began his journey to global prominence decades ago by entering “the Long Grey Line” of cadets at the United States Military Academy, commonly known as “the Academy,” or West Point. Initially a basketball player under legendary Mike “Coach K” Krzyzewski, Brooks hung up his sneakers to concentrate on scholarly pursuits, and in the process graduated as class valedictorian and First Captain of the Corps of Cadets of the class of 1980. He was the first African American to do so.

As the new school year begins, another outstanding young person is poised to make history, as Simone Askew of Fairfax, Va., becomes the first African American woman to assume the position of First Captain of the Corps of Cadets. To give a historical perspective to those unfamiliar with the institution, past first captains have included Generals Peter M. Dawkins (a Heisman Trophy winner), Douglas MacArthur, John J. Pershing, and William C. Westmoreland.

Since opening its doors to coed cadets in 1976, female West Pointers have distinguished themselves in the classroom and as career professionals. Askew was preceded as First Captain by Kristen Bauer (now a Colonel) in 1990. Prior to Askew's promotion, the highest-ranking Black (and Hispanic) woman cadet in corps history, was Cadet Command Sergeant Major Emily J. T. Perez (class of 2005), who became the first graduate of her class to die in the War on Terror, when an I.E.D. (Improvised Explosive Device) upended her Humvee as she served as a Medical Service Corps officer in Iraq, during 2006.

Asian American Grace H. Chung served as First Captain during the second semester of her senior year in the class of 2003, and spent six years as a medical services officer before becoming a dentist.

The class of 2006's First Captain (and class president) African American Eugene E.J. Coleman made another milestone when he came out as gay to Vice President Joseph Biden, who addressed his graduation commencement. He is now serving as an artillery officer in the U.S. Army.

Askew was president of her class at Virginia's Fairfax High School, founder of the Black Student Union, and captain of the volleyball team. As her school's homecoming queen, she skipped the ceremony to attend a recruiting weekend at West Point.

Her hometown of Fairfax is part of the Washington, D.C., metropolitan area. Her mother develops low-income housing in southeastern Washington, while her younger sister, Nina, continues the family tradition of excellence as a highly regarded volleyball player (“… she's much better than I ever was,” Simone confide).

Once at the Academy, she continued her athletic pursuits as a member of the West Point Crew team, a sport she'd previously engaged in as a freshman in high school.

As she completes her degree in international history, Askew is leaning towards military intelligence as her branch of choice. Regardless of which career option she decides upon, 2nd Lt. Askew will make a wonderful addition to the Army's leadership.