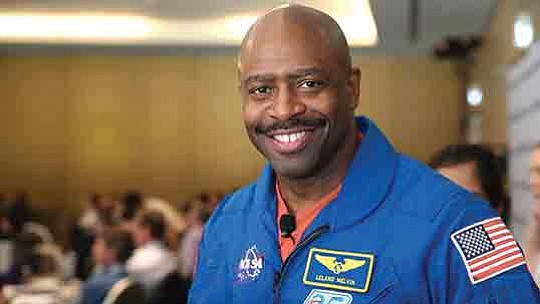 A lot of little boys dream of growing up to be an astronaut or a pro football player, but Leland Melvin is the only person who has done both of those things.

Melvin was a wide receiver for the University of Richmond. He was also on the roster for both the Detroit Lions and the Dallas Cowboys before being cut. Melvin was recruited by NASA while he was in grad school. He eventually qualified for the astronaut program and flew in space. Melvin details his journey from the football field to the International Space Station (ISS) in his new book “Chasing Space.”

In the book, he writes about NASA’s efforts to increase the diversity of its astronauts and scientists and meeting Katherine Johnson, one of the first Black female scientists recruited in the 1950s. Johnson’s efforts were made famous by the movie “Hidden Figures.”

Melvin retired from NASA about three years ago and is currently doing public speaking and television appearances.

He said that he doesn’t find it surprising that he was able to thrive in the worlds of pro sports and science. Leland says he has always been able to negotiate both worlds and insisted that he be able to take time off for his classes while he was at the University of Richmond.

According to his book, traveling in space is an amazing life-changing experience which makes you look at the big picture.

“You realize that you are traveling in space at five miles a second,” said Melvin.

He added that the political and geographic boundaries which define us on Earth disappear when you are in space. He pointed out that the ISS is an international collaboration involving several countries.

“It is a testimony to what we are as a species that we can come together and build an outpost in space,” he said.

Although there has been a push for NASA to pursue unmanned space exploration with robots, Melvin still thinks there is a need for humans in space.

“A robot doesn’t have a soul,” he said. “It can never be as powerful as the human brain.”

According to Melvin, future space developments include a mission to Mars and a deep space gateway, which is a mini space station astronauts can use to refuel and supply for long missions.

He also pointed out that space is being used to conduct Parkinson’s Disease and stem cell research.

Many people criticize the cost of the space program, but Melvin says it’s still cost effective compared to other programs.