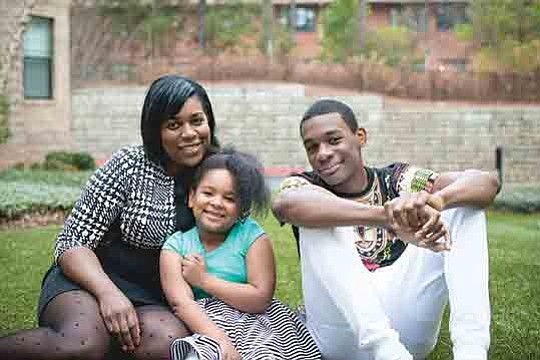 Shyronn Jones, 39, and her children, Shyloh, 5, and Shymere, 14, live in Atlanta. The federal program called Housing Opportunities for Persons With AIDS helps Jones afford an apartment near a park where her daughter can safely play. (Photo by Trevor Cochlin/Courtesy of the Jones family)

In a bipartisan push, Congress has restructured a federal housing program for HIV patients to funnel more money into areas struggling to control the spread of the virus.

While legislators and housing advocates say the adjustments will better target regions with high rates of HIV, the changes are likely to mean less money for some of the large cities that faced the early effects of the epidemic. But California’s largest city, Los Angeles, will see its percentage of total program funding increase, as will San Diego, the state’s second largest city.

To help smooth the transition, Congress increased funding for the Housing Opportunities for Persons With AIDS (HOPWA) program by about 6 percent this year. In the past, the money was distributed across the country based on the number of cumulative cases — including people who had died — in each funding region.

Under the 2017 funding plan, finalized by Congress in May, HOPWA awarded $320.4 million to qualifying states and local jurisdictions to be apportioned primarily based on their share of the total number of people living with the virus. The number of cases required to qualify for funding changed from 1,500 cumulative AIDS cases to 2,000 cases of people living with HIV/AIDS.

The funding increase ensures that no jurisdiction will receive less HOPWA money than in 2016, but about 25 cities and counties are getting a smaller piece of the pie than before. The five seeing their percentage of funding drop the most are, in descending order, New York City, Atlanta, Miami, Washington, D.C., and Houston.

In California, 11 cities and the state will receive funding totaling nearly $40 million – an increase of more than $3.9 million from last year. The program assisted more than 3,800 HIV clients in California from July 2015 to June 2016, according to the state’s Department of Public Health.

Los Angeles, which gets $15.6 million this year, will see its share of HOPWA funds increase from 4.54 to 4.87 percent — the largest gain among major U.S cities. San Francisco, which was at the epicenter of the AIDS epidemic when it first broke out in the 1980s, ranks among the 25 cities with a shrinking share of overall funding. In 2016, it got 2.35 percent of the $301 million in HOPWA allocations. This year, its roughly $7.1 million will amount to 2.23 percent.

The extra money flowing into California will help individuals afford housing in some of the nation’s most expensive markets. But without continued increases in the dollars earmarked for the program, cities such as San Francisco that saw large numbers of AIDS deaths at the beginning of the epidemic could eventually see their funding decline.

The program, which began in 1992, provides financial assistance to help participants pay for rent, mortgage and utility costs. HOPWA also offers competitive grants to jurisdictions and organizations, but that allotment accounts for only about 10 percent of its budget and is not included in the $320.4 million.

Shelter is one of the most important factors in determining an individual’s success in HIV treatment. According to the Department of Housing and Urban Development, which administers the HOPWA program, housing instability is linked to delayed testing and gaps in care. The department estimates roughly half of the individuals living with HIV in the U.S. will experience a housing crisis in their lifetime.