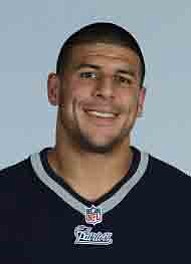 Hernandez was serving life without parole for killing Odin L. Lloyd in an industrial park near the football player’s million-dollar North Attleborough home in 2013.

According to CNN, the 27-year-old former tight end hanged himself with a bedsheet attached to a window in his cell at the Souza-Baranowski Correctional Center in Shirley, the Massachusetts Department of Correction said.

His body was discovered at 3:05 a.m, authorities said.

“Lifesaving techniques were attempted on Mr. Hernandez, and he was transported to UMass Memorial-Health Alliance Hospital, in Leominster, where he was pronounced dead at 4:07 a.m.,” the correction department’s statement reads.

Hernandez, who was serving a life sentence, was alone in his cell in a general population wing and had “attempted to block his door from the inside by jamming the door with various items,” the statement reads.

Hernandez was taken to UMass, Leominster, reports the Boston Globe.

He was pronounced dead at 4:07 a.m., the Department of Correction said. The state medical examiner’s office has since taken custody of Hernandez’s body and will conduct an autopsy to determine the cause and manner of death.

The Massachusetts State Police will also investigate his death.

Jose Baez, an attorney for Hernandez, has been retained by the athlete’s family to join the investigation and will also act as the executor of his estate, according to a statement from Baez.

“There were no conversations or correspondence from Aaron to his family or legal team that would have indicated anything like this was possible.

Aaron was looking forward to an opportunity for a second chance to prove his innocence,” Baez said in a statement. “Those who love and care about him are heartbroken and determined to find the truth surrounding his untimely death. We request that authorities conduct a transparent and thorough investigation.”

Corrections Department spokesman Christopher Fallon says there was no suicide note found during the initial search of Hernandez’s cell.

He was not on a suicide watch because he had not signaled he was at risk, Fallon said.

“If he had made any kind of statement, he would have not been in that unit,” Fallon explained.

In his short-lived playing career, Hernandez displayed superior ability before he murdered his best friend (Lloyd) in a feud that escalated to a fatal end. Prior to this incident, Hernandez’s future consisted of a lucrative 40 million dollar contract with New England, a new marriage, and the birth of his young daughter.

His death marks one of the most dramatic falls from grace by an athlete in recent memory, and came the same day that many of his former teammates visited the White House as Super Bowl Champions.