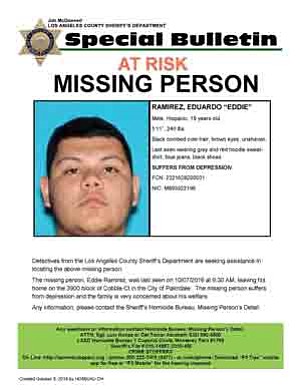 Eduardo “Eddie” Ramirez was last seen at 9:30 a.m. Thursday leaving his residence in the 3900 block of Cobble Court, according to Deputy Lisa Jansen of the Sheriff’s Information Bureau.

Deputies have Ramirez’ picture and description and are on the lookout for him while on patrol, said Deputy Kelvin Moody of the Sheriff’s Information Bureau.

He was last seen wearing a gray and red hoodie sweatshirt, blue jeans and black shoes.

His family was concerned because the man suffers from depression, Jansen said.

Another person has been reported missing in Lancaster. Sheriff’s deputies this week began a search for Rose Fountain, 71, who was last seen the afternoon of Oct. 7 leaving Antelope Valley Hospital. Ford is reportedly forgetful and easily confused, is 5 feet 2 inches, and weighs 170 pounds with brown hair and eyes. She was last seen wearing gray sweat pants and brown shoes.

Anyone with information about the location of either Ramirez or Fountain are urged to contact the Los Angeles County Sheriff’s Department’s Missing Person’s Detail at (323) 890-5500. If you prefer to provide information anonymously, you may call “Crime Stoppers” by dialing (800) 222-TIPS (8477).