Legalizes growth and use of recreational marijuana 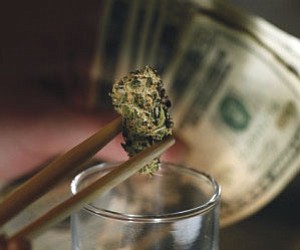 While some states have voted to allow the growth, sale and use of marijuana for medical purposes, California is proposing to allow recreational growth and use of the drug, with some restrictions and a 15 percent tax.

Proposition 64, called the Marijuana Legalization Initiative Statute, is the measure that would do this. There is a lot of support for the measure, as well as a lot of opposition, but those that support it have raised more than $11 million for their campaign; the opposition has only raised $229,385.

Yes, money is at the center of this proposition, and insiders predict legalization of pot could generate $1 billion for the state’s coffers.

A similar measure was on the ballot in 2010, and lost by a only narrow margin.

One of the arguments against allowing recreational use of marijuana comes from Sacramento County District Attorney Anne Marie Schubert, who told the Los Angeles Times, “We don’t have studies to show what the effect will be on future generations.”

The actual proposition is more than 60 pages long. Here are some of its highlights:

• Would allow people older than 21 to grow six plants at home out of public view, possess up to an ounce and use it for non-medical purposes.

• Money from an excise tax (15 percent) on usage would go to a California Marijuana Tax Fund, and most of that money would go to youth programs, environmental issues created from illegal growth and to programs developed to reduce impaired driving and other impacts that recreational use may have on public safety.

• Would change the sentencing guidelines for marijuana-related crimes, reducing the punishment for selling recreational marijuana from a maximum of four years to six months.

• Would allow judges to consider reducing the sentences of people who are already serving time for selling or growing pot illegally.

According to the Los Angeles Times, legalization would also cause prices to drop dramatically.

The pros and cons

The Yes on 64 campaign features a plethora of supporters, including a number of Assembly-

members, mayors and city council people, as well as a variety of organizations. They include the California Democratic Party, the ACLU of California, the African American Alcohol and Other Drug Council of L.A. County, Breaks the Chains: Communities of Color and the War on Drugs, the Institute of Black World 21st Century, MLK Legacy Democrats, the Sacramento Black Chamber of Commerce, Democrats for Equality, Blacks in Law Enforcement and dozens more.

According to the Yes on 64 campaign, the measure has specific safeguards in place that would protect kids while allowing responsible use by adults. In addition, the proposition would generate a significant amount of tax revenue.

As with supporters, a number of politicians and organizations are opposed to Proposition 64.

Opponents include a large number of sheriffs and chiefs of police, and some mayors. Organizations that oppose include the National Network of Youth Ministries, the Organization for Justice and Equality, the Weed for Warriors Project and the Small Farmers Association, among others.

Opposing factions claim that the measure would result in more highway fatalities and more impaired driving. They also say that the proposition would allow growth of marijuana near schools and parks, while it would also increase black market activity. In addition, it would allow advertisements for the smoking of pot to air on TV, and that it would “hurt underprivileged neighborhoods.”

According to Rev. Bishop Allen, who opposes Proposition 64, it is an “attack on minorities” and “neighborhoods that are already reeling from alcohol and drug addiction problems.”

A yes vote on this measure means: Adults 21 years of age or older could legally grow, possess and use marijuana for nonmedical purposes, with certain restrictions. The state would regulate nonmedical marijuana businesses and tax the growing and selling of medical and nonmedical marijuana. Most of the revenue from such taxes would support youth programs, environmental protection and law enforcement.