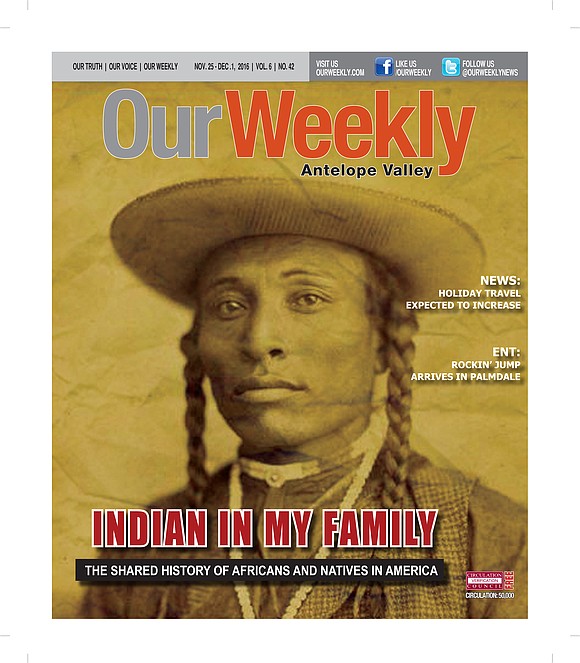 With yesterday’s Thanksgiving holiday, the recent celebration of Columbus Day, and the ongoing fight to the block the Dakota Access Pipeline from being built through the Standing Rock Sioux Reservation in North Dakota, many of the issues that Native Americans have always confronted have been once again thrusted into the spotlight.

With the seemingly never-ending plight of African Americans in this country also being highlighted by the influx of overt racism under the influence of the new president-elect, these two severely disenfranchised groups may begin to find they are much more alike than they’ve before realized.

According to the Library of Congress, the first celebration of Columbus Day took place on the 300th anniversary of his first voyage on Oct. 12, 1792, when New York’s Columbian Order—also known as the Society of St. Tammany—held an event to commemorate the anniversary of Columbus’ landing. After that, various celebrations around the country started popping up to honor Columbus’ Italian and Catholic heritage.

The Knights of Columbus, an international Roman Catholic fraternal benefit society, began lobbying state legislatures to declare Oct. 12 a holiday. They succeeded in getting Colorado to agree in 1907 and New York in 1909. Then, in 1934, President Franklin Delano Roosevelt designated Oct. 12 a national holiday.

South Dakota was the first state to rename the federal holiday as Native American Day in 1990, and Minneapolis and Seattle were the first major cities to change Columbus Day observance to Indigenous Peoples Day in 2014. In 2015, the state of Alaska recognized the second Monday in October as Indigenous Peoples Day, as well as a number of cities including Albuquerque, N. M.; Lawrence, Kan.; Portland, Ore.; Anadarko, Oklahoma; Olympia, Washington; Alpena, Mich.; and Bexar County, Texas. Hawaii doesn’t recognize Columbus Day as a holiday at all.

According to Southern California Public Radio, Los Angeles might not be too far behind in making the switch. The L.A. City Council is currently considering a proposal to replace the federal holiday with a local one celebrating Indigenous peoples.

“They were there before any of us, and the incredible sacrifices, the decimation of their cultures, the separations within the families that the missions were responsible for—it’s a pretty ugly, depressing history,” said O’Farrell.

The conflict at Standing Rock, which has taken place for a number of months, continues to gain in momentum and as members of other native tribes and those who support their fight descend on the reservation to protest. Most recently, police were recorded using water cannons on non-violent protesters (or “water-protectors’ as they are being called) in 27 degree weather, which is undeniably inhumane. One familiar group that is standing in solidarity with these Indigenous peoples is Black Lives Matter.

“In the state of North Dakota, there is a movement for all of us. A movement for the recognition that water is life. A movement led by warriors, women, elders, and youth. A movement made possible by the actions taken by those who came before us, steeped in the wisdom of elders. A movement anchored by Indigenous women who put their bodies on the line for our liberation,” said the group in a recent statement.

“Black Lives Matter stands with Standing Rock. As there are many diverse manifestations of Blackness, and Black people are also displaced Indigenous peoples, we are clear that there is no Black liberation without Indigenous sovereignty. Environmental racism is not limited to pipelines on Indigenous land, because we know that the chemicals used for fracking and the materials used to build pipelines are also used in water containment and sanitation plants in Black communities like Flint, Mich. The same companies that build pipelines are the same companies that build factories that emit carcinogenic chemicals into Black communities, leading to some of the highest rates of cancer, hysterectomies, miscarriages, and asthma in the country. Our liberation is only realized when all people are free, free to access clean water, free from institutional racism, free to live whole and healthy lives not subjected to state-sanctioned violence. America has committed and is committing genocide against Native American peoples and Black people. We are in an ongoing struggle for our lives and this struggle is shaped by the shared history between Indigenous peoples and Black people in America, connecting that stolen land and stolen labor from Black and Brown people built this country. Black Lives Matter affirms that our lives do matter on Indigenous Land. We affirm our family’s right to land and clean water, a right that does not change based on the whims of American companies who wish to make more money off poisoning the waters that we depend on to live. We affirm our right to live takes precedent over corporations’ prerogative to make a profit.”

The history of Black Indians

African American support of Native Americans goes beyond just standing against the pipeline.

And, as mentioned in the statement by Black Lives Matter, research shows that the two groups are a very closely related people and “Black Indians” (people of mixed African American and Native American heritage, who have strong ties to Native American culture) still exist to this day.

Many Indigenous peoples of the Eastern Woodlands, such as the Narragansett, Pequot, Lumbee and Cherokee, reportedly have a significant number of African ancestors.

Historically, certain Native American tribes have had close relations with African Americans, especially in regions where slavery was prevalent, or where free people of color have historically resided. Members of the Five Civilized Tribes ( the Cherokee, Chickasaw, Choctaw, Creek (Muscogee), and Seminole—the first five tribes that Anglo-European settlers generally considered to be “civilized” according to their own world view, because these tribes adopted attributes of the colonists’ culture) also participated in enslaving Africans, and some Africans migrated with them to the West on the Trail of Tears in 1830 and later. In peace treaties with the U.S. after the American Civil War, the slaveholding tribes, which had sided with the Confederacy, were required to emancipate slaves and give them full citizenship rights in their nations.

Until recently, historic relations between Native Americans and African Americans were relatively neglected in mainstream United States history studies. As noted by Mary Dempsey in “The Indian Connection (1996),” at various times, Africans had varying degrees of contact with Native Americans, although they did not live together in as great numbers as with Europeans. African slaves brought to the United States and their descendants have had a history of cultural exchange and intermarriage with Native Americans, as well as with other enslaved people who possessed Native American and European ancestry. Most interaction took place in the Southern United States, where the largest number of people were enslaved. A significant number of African Americans thus have some Native American ancestry, although not all have current social, cultural or linguistic ties to Native peoples.

Relationships among different Native Americans, Africans, and African Americans have been varied and complex. Some groups were more accepting of Africans than others and welcomed them as full members of their respective cultures and communities. Native peoples often disagreed about the role of ethnic African people in their communities. Other Native Americans saw uses for slavery and did not oppose it for others.

After the Civil War, some African Americans became members of the U.S. Army and fought against the Native Americans, especially in the Western frontier states. Their military units became known as the Buffalo Soldiers. Black Seminole in particular were recruited and worked as Native American scouts for the Army. On the other hand, other Native Americans and people of African descent fought alongside one another in armed struggles of resistance against U.S. expansion into Native territories, as in the Seminole Wars in Florida.

According to “Black Indians: A Hidden Heritage” by Williams Katz, records of contact between Africans and Native Americans date back to April 1502, when the first enslaved African arrived in Hispaniola. Some Africans escaped inland from the colony of Santo Domingo; those who survived and joined with the natives became the first circle of Black Indians. In the lands which later became part of the United States of America, the first recorded example of an African slave escaping from European colonists and being absorbed by Native Americans dates to 1526.

Intermarriage between enslaved African and Native Americans began in the early 17th century in several coastal settlements. As noted in “Africans and Indians: Only in America,” in 1622, Native Americans attempted to overrun the European colony of Jamestown. They killed the Europeans but brought the African slaves as captives back to their own communities, gradually integrating them. Interracial relationships occurred between African Americans and members of other tribes in the coastal states.

“There’s never been any stigma about intermarriage,” says Stu Phillips, editor of The Seminole Producer, a newspaper in central Oklahoma. “You’ve got Indians marrying Whites, Indians marrying Blacks. It was never a problem until they got some money.”

Phillips is referring to the settlements that many Native Americans recieved from the goverment as reparations for their mistreatment. Money which should have undeniably also been distributed to a number of African-Native Americans and their decendents. Unfortunately, some tribes, namely the Cherokee, have in many cases neglected to acknowledge these Indigenous peoples as their own, and put in place stringent qualifications, such as Africans having proof they were “Cherokee-by-blood” and relying on the Dawes Rolls (final rolls of citizens and Freedmen of the Five Civilized Tribes used to negotiate land allotment) to prove it, and knowing, in many cases, the rolls were flawed due to many peoples names being changed during slavery. According to “Myths: Decendents of Freedmen of the 5 Civilized Tribes,” descendants of Freedmen see the tribe’s contemporary reliance on the Dawes Rolls as a racially biased way to exclude them from citizenship.

Nevertheless, with the Thanksgiving holiday, most African American households hosted friends and family to feast and celebrate the blessings the year has brought them. In a stark contrast, many Native Americans traveled to Cole’s Hill in Plymouth to commemorate a National Day of Mourning as they have done since 1970. Those with mixed heritage may have fallen somewhere in between. So, although those who possess both African and Native American blood may be few and far between today, or more specifically, according to Harvard University historian Henry Louis Gates, “only 5 percent of all Black Americans have at least 12.5 percent Native American ancestry, the equivalent of at least one great-grandparent,” the fact remains that even without shared blood we have a lot of shared experience in America. And, when it comes to having empathy and standing in solidarity with these Indigenous people, shared experience may be more important. Visit www.nodaplsolidarity.org to find ways to join action against the Dakota Access Pipeline and how you can otherwise donate, get involved, or reach out to your local community leaders to force attention to the cause.