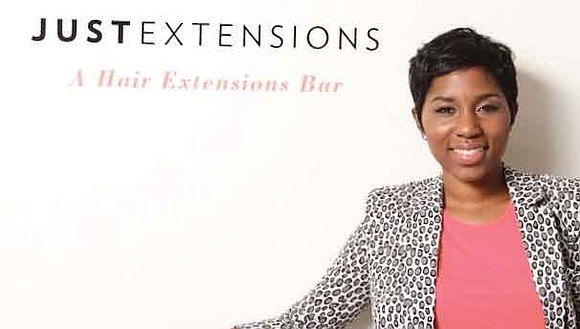 Black women are known to spend thousands on the billion-dollar hair industry, but very few of them are buyers or suppliers in this industry. Riqua Hailes, owner of Just Extensions, is one of few Black women who supplies hair extensions. Hailes has a salon called Just Extensions, which also has an online store.

She says she is beginning to see more African Americans get into the retail and supply side of the industry.

“It’s an emerging industry for African Americans,” said Hailes, who started in the hair industry about eight years ago on the East Coast. Eventually her operation grew and she decided to move to the West Coast.

Her Los Angeles-based store, Just Extensions, serves a diverse clientele. Hailes said she has become somewhat of an international traveler in search of top quality hair extensions. She’s been on business trips to China, India, Brazil, Cambodia, Malaysia and Peru in search of hair suppliers. She has also created a documentary, “Just Extensions—The Documentary,” about her travels to these countries. The film is available on Amazon and iTunes.

“I wanted to document my journey so my clients could see first hand my experience. Originally I was just going to post short clips but the journey was so impactful that I thought people would enjoy it,” said Hailes. “I’ve learned so much producing this film from various cultures, to travel tips and religious beliefs. But most importantly, I’ve learned that business relationships are better made in person and ongoing. The hair extensions industry is a tricky business and learning about various hair textures first hand has allowed me to learn things about hair I would not have learned if I didn’t make this documentary.”

Hailes says it can be challenging finding quality hair in an industry which is largely unregulated.

She says the Chinese suppliers largely dominate the industry, because it’s difficult for other people to compete with their prices.

She says there are more Black people getting into the beauty supply industry. According to Hailes, one of the obstacles many African Americans face is fear of travel.

“It’s risky,” she said. “But if you can find the right person (supplier), it can be lucrative.”

“With the help of social media, people don’t have to rely on costly marketing and advertising plans, they can use social media to market their products and the internet to purchase products from around the world,” said Hailes. “It’s an alternative to traditional business models and allows the community who are directly wearing the products to source and sell to their community and make money. “

Hailes said that her industry has not been affected by the recent boom in Black women opting to go natural with their hair. She said that there are hair extensions for women who want to wear natural styles such as afros.

“Even with this trend natural hair extensions are not going anywhere. People want to wear bigger afros,” Hailes said. “They’re always going to have a little enhancement.”

Although Just Extensions serves a diverse group of clients, Hailes said that Black customers are unique. They are constantly changing their hairstyles and looking for something different and new.