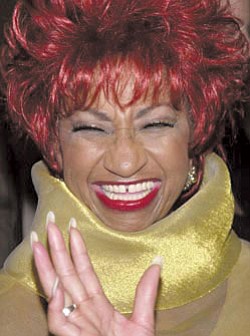 Cuban-American singer Celia Cruz goes down in history as one of the most popular salsa performers of all time. Known as the “Queen of Salsa” Cruz has made more than 75 albums including 23 that went gold, and won several Grammys and Latin Grammys. According to her bio she also appeared in several movies: “Affair in Havana”(1957), “The Mambo Kings” (1992), “The Perez Family” (1995), earned a star on Hollywood’s Walk of Fame and was awarded the American National Medal of the Arts by the National Endowment of the Arts.

Cruz was born on Oct. 21, 1924 in Havana, Cuba, as Úrsula Hilaria Celia de la Caridad Cruz Alfonso. Cruz grew up poor in a Havana neighborhood of Santos Suarez where she was surrounded by the sounds of diverse musical rhythms. She was Mulatta or Black which meant she was seen as inferior, automatically limiting her to few opportunities for growth. But she had a dream to become a singer. However, her father’s dream was for her to become a teacher, an acceptable position for a person of her class. And try as she might to honor her father’s wishes, her dreams, and her passion for singing wouldn’t die.

At that time, it wasn’t easy for a Mulatta to rise above their station. As in America, racism ruled the day and Black Latinos (Mulattas) were treated very much like Blacks in America—access denied.

Cruz did try to honor her father’s wishes but fate cannot be denied, she was born to sing, and despite racism and all the other things that blocked her path, sing she did. It all started with her winning the “La hora del te” (Tea Time) singing contest, which propelled her into a music career. But to her dismay, she continued to waver back and forth about going to school to become a teacher. She even enrolled at the National Teachers’ College, but dropped out because the demand for her local singing engagements began to grow.

As Cruz’s reputation as a singer grew, she garnered the attention of the celebrated Cuban orchestra Sonora Matancera. Initially, there were doubts about whether Cruz would mesh with the orchestra because of the popular belief at that time that a woman could not sell salsa records at all. Cruz however, helped propel the group and Latin music in general to new heights. The band toured through Central and North America throughout the 1950’s.

In an interview with the New York Times, Cruz said, “I wanted to be a mother, a teacher and a housewife. But when I began to sing with La Sonora Matancera, I thought, this is my chance, and I’m going to do it.”

The Communist takeover of Cuba in 1959 found Cruz and the orchestra touring in Mexico, and it was at that time the group, including Cruz, decided to cross into the United States. Cruz became a U.S. Citizen in 1961. Fidel Castro, enraged by Cruz’s defection barred her from returning to Cuba.

Cruz was virtually unknown in America, but when she joined the Tito Puente Orchestra in the mid-1960s she gained exposure to a wide audience.

There is still so much to tell about Celia Cruz, like her love life and 40 year marriage to Pedro Knight, a trumpet player for Sonora Matancera when Cruz was first hired as a back-up singer. The couple soon began a relationship that lasted until Celia Cruz’s death on July 16, 2003. She was 77 years old and was living in Fort Lee, New Jersey.

Her story doesn’t end there. Much to my delight, the story of Celia Cruz and her rise to stardom can now be seen on Netflix.

You can now view 80 episodes of “Celia” the TV series based on the life of legendary singer. It is superbly entertaining and opens with a vivid re-creation of 1950s Cuba.

And while the series takes some liberties with history, it’s the kind of drama the Telemundo network believes will keep viewers engaged. And it certainly will.

“Celia” now streaming on Netflix, is a treat to see and an opportunity to learn more about a culture that mirrors the African American culture at that time.