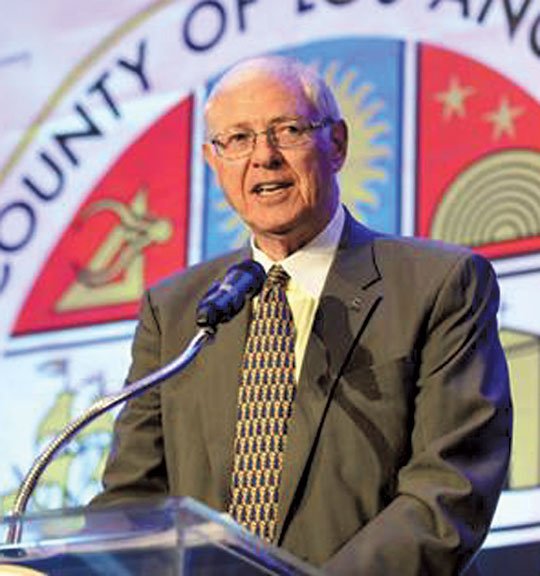 The Board of Supervisors voted this week to press for a change to state law that would allow the county to put a “millionaire’s tax” on the November ballot to fund the fight against homelessness.

Supervisor Michael Antonovich argued that the problem of homelessness cannot be solved until the state changes the law that limits 72-hour holds for mentally ill individuals and treatment for mental health problems is mandated. He also warned that a county “millionaire tax” would drive business away. “Making the tax higher is taking dollars from job creators,” Antonovich said.

Solis opened the board’s meeting by saying, “We have resolved our differences and we have agreed to move ahead.”

The board also approved a related proposal by Solis and Supervisor Don Knabe, directing the CEO’s office to take a harder look at spending on homelessness, with an emphasis on how to more effectively serve single homeless adults.

A 34-page study by the CEO’s office in January found that the county spent nearly $1 billion on roughly 150,000 people who were homeless at one point or another between July 2014 and June 2015.

Services provided included health care, mental health care, welfare, law enforcement and probation services, with the study estimating that about 40 percent of those dollars were spent on just 5 percent of homeless single adults.

“The vast majority of these services are mainstream services,” said Phil Ansell, director of the county’s Homeless Initiative, meaning that the services are not designed specifically for homeless people or to directly combat homelessness.

However, homeless individuals end up using a disproportionate share of those services and the chronically homeless use even more, with the county spending an average of more than $50,000 per person on the most costly 5 percent.

The vote clears the way for the county to submit a trailer budget bill to state legislators asking for the authority to put the so-called “millionaire’s tax” on the November ballot.

If a majority of legislators support the bill by June 15 and if Gov. Jerry Brown signs it into law by June 30, then the board will have to decide whether to actually back a ballot measure that would require two-thirds voter approval for passage.

Pollsters commissioned by the county were confident about voters’ positive response to such a measure. A preliminary poll showed 76 percent support such a tax, even in light of several other potential ballot proposals for new taxes or fees.

More than 100 community leaders and activists spoke out about the issue, most advocating for those who are homeless and many applauding the effort to review current spending.

“Some areas of Los Angeles County look like a bomb has hit,” community activist Glenna Wilson told the board.

County CEO Sachi Hamai has estimated that the county needs to raise about $500 million in ongoing revenue to effectively address the problem.

County staffers and pollsters considered several ways of raising that money, including a half-percent increase in sales tax, a parcel tax, redirection of Measure B revenues—designed to support trauma centers—and a marijuana tax.

The idea of a half-percent tax on personal income in excess of $1 million garnered the highest support, with 76 percent of voters polled in favor.