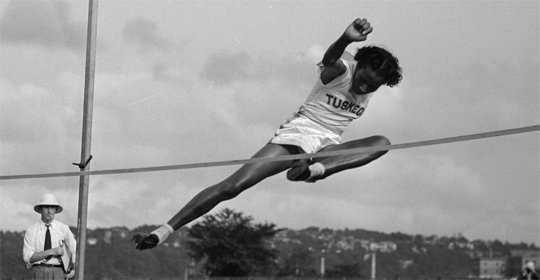 Alice Coachman displayed natural athletic abilities growing up in the 1920s, beating the boys in foot races and other athletic competitions in her neighborhood in Albany, Ga. But being Black and a female in the segregated South meant that she had limited opportunities to develop her abilities.

Coachman was born in 1923, and she had nine siblings. Because of Jim Crow laws, Blacks were not allowed to play on sports teams with White children, so Coachman was unable to hone her skills through conventional means. Also, being a young girl, she was discouraged from playing sports, because her parents wanted her to do something more ladylike.

But Coachman was not going to be stopped, so she had to find other means to increase her athletic abilities. She trained for sprint events by running through dirt fields; and she increased her leaping abilities by tying rags to objects and jumping over them.

The unconventional athletic training paid off, because Coachman received a scholarship to attend Tuskegee Preparatory School at the age of 16.

Before the college, she competed in a track meet, where she broke the high school and collegiate high jump records without wearing shoes. When she got to Tuskegee, she continued her athletic career, winning national championships on the 4 by 100-meter relay teams in 1941 and 1942. The following year, she won the Amateur Athletic Union national title in the high jump and the 50-yard dash.

Even with her great abilities and accomplishments, an opportunity for an Olympic gold medal had eluded Coachman. The 1940 and 1944 Olympic Games were canceled due to World War II. She would have been one of the favorites in both games.

Coachman finally had her chance at Olympic glory during the 1948 London Games. For her, this was more than personal glory, because she knew that if she succeeded, she would open the doors for other Blacks, especially Black women. However, if she failed to win the gold, others might not have been able to follow in her footsteps. During those times, Blacks had to be exceptional in their field just to gain an opportunity. Consequently, she knew she had to win.

Coachman had finally reached the mountaintop, and she proved that people who were thought to be inferior, and who did not have an environment that allowed them to get the most out of their abilities, could still overcome the odds and succeed at the highest level.

Upon her return home, Coachman was a star. She received a parade, and many people sent her gifts. But even in her moment of glory, it was still evident that Blacks were viewed as second class citizens.

There was an assembly in Coachman’s hometown of Albany to honor her. Blacks were on one side of the room, and Whites were on the other. The mayor of the town gave her great praise at the assembly, but he would not shake her hand. She felt that he did her wrong, because she won the gold medal as an American, as a woman from the State of Georgia, and from the town of Albany.

Coachman won the gold medal as an American, but she was not received as one. It pained her that she felt more welcomed in London during the Olympics than in her home town. After coming home, she received numerous gifts, and she quickly developed a sense of where the gifts came from, according the TeamUSA.org website. If the gift giver signed their name, it was from a Black person. If there was no name left on the gift, it was from a White person who did not want people knowing that they sent a gift to a Black person.

Even with the racial issues, Coachman inspired the next generation of Black athletes, and more Black women got involved in sports after that. She was one of the Black trailblazers who opened the doors for the next group of Blacks who brought more equality to sports, during the Civil Rights era.

During her career, Coachman was named to five All-American teams, and she was inducted into eight different Halls of Fame. At the 1996 Atlanta Olympics ,she was named one of the 100 greatest Olympians ever.