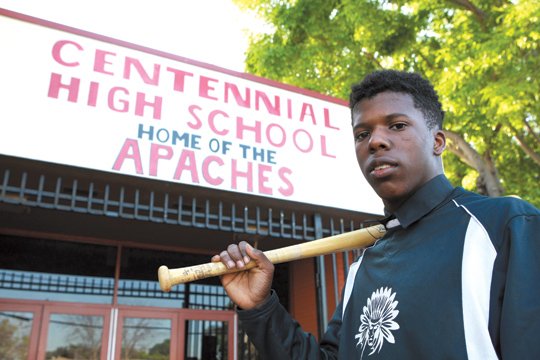 While many young Black men use their athletic talents for football and basketball, Centennial High School senior Edward Macon detoured off of that path and chose his own route.

“I have the knack for being different, so I like to try things that other people don’t want to play,” Macon said. “In my family it was a lot of basketball and football. I just decided to take a different route and try baseball, and ever since then I fell in love with it.”

Macon first picked up a bat and glove eight years ago at Holly Park, and the speed and quickness that often makes many Black kids great at football and basketball instantly transferred over to that sport. He plays shortstop, second base, and center field, which are three of the most athletic positions in the game. He is also a dominant base stealer.

But athleticism is only a part of the game; Macon said he is also attracted to the mental aspects of baseball.

“It’s the [complexity] of the game,” Macon said. “It’s easy for anybody to pick up a basketball and make a hoop. Or pick up a football and score a touchdown. But as far as baseball, it requires more critical thinking, and it was a tougher challenge for me.”

Being able to figure out an opponent’s tendencies before a play happens makes a huge difference in baseball, and being an intelligent player has greatly helped Macon put himself in position to make a defensive play, or know where to hit the ball.

“On the baseball field, you can see how the batter stands, which way he’s trying to go with the ball,” Macon said. “There is a 90 percent chance that he’s going to go that way with the ball. Or when I’m at the plate, if the infielders are playing up or back, I’m going to lay down a bunt. I can think right away. I don’t have to call for time, I know what to do. When you’re on base, knowing when to go, when not to go. It’s more critical thinking than instinct.”

Along with critical thinking, Macon has great hand-eye coordination which he said allows him to hit a fastball that could travel up to 90 miles per hour. Last season he batted .340, and this year he has seven hits through the first three games of the season.

Macon compares himself Pittsburgh Pirates center fielder Andrew McCutchen, who is not a big guy, but is explosive. The 2013 National League MVP stands at 5’ 10”, while Macon is 5’ 9”. Last year, Macon was named second team all-league, and he was among the league leaders in serval offensive categories.

For Macon, practice makes perfect, and he works on his craft on a daily basis.

“It’s just repetition, Monday through Friday, everyday,” Macon said. “It’s the same thing everyday. It’s defensive fielding, running laps, and then doing a lot of hitting. Once I’m on the field, certain plays have become natural to me.”

Athletically, Macon is a year-round player, because he played football up until last year. But he gave up the sport because he was getting too many injuries. He has been a key contributor on the basketball team. During his junior year, Macon averaged 11 points per game, and this past season he averaged 14 points. He also plays on a travel baseball team.

Academically, Macon has a 3.5 grade point average while taking Advanced Placement and honors classes, and he uses his surroundings in Compton as motivation to continue to work hard.

“Seeing the people that I grew up around, that’s just not what I wanted to be,” Macon said. “I wanted to do whatever I had to do to prevent myself from being that type of person.”

Like all student-athletes who excel in both the classroom and in their sport, time management is a key for Macon.

Macon favors English and history because he enjoys reading books and learning about different cultures. As a freshman, he read a book about neurosurgeon Ben Carson, which inspired him.

“He kind of gave me a spark,” Macon said. “If he was able to do this, then I (should be) able to accomplish my goals. It was an inspiration to me.”

In school, Macon’s favorite time period to learn about is more recent history.

Macon has been accepted to three Cal State Universities and 14 Historically Black Colleges and Universities. Clarke Atlanta University is high on his list, but he may choose to stay closer to home to help support his mother. He is the youngest of four, and his father passed away some time ago. Cal State Sacramento and Cal State Northridge are strong options for him, because he would like to move away, but not too far away. He would be the first person in his family to graduate from college.

“The hardest challenge is deciding which school I’m going to go to,” Macon said.

Choosing a major may not be as difficult a decision, because Macon is thinking about business and economics.

“I want to be able to come back to my community and be able to provide, if it’s not money, then it’s going to be knowledge,” Macon said. “I think that business is a first step to accomplishing my goals. I want to come back and be that male influence that I didn’t have growing up.”

Macon is already giving back to his community, because he coaches youth baseball players at Gonzales Park.