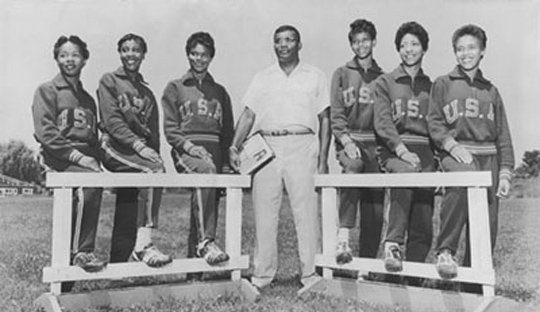 Title IX brought equality to high school and college sports, when it was introduced in 1972. The legislation gave equal funding to men’s and women’s sports, leveling the playing field. Before Title IX there were individual female athletes who excelled, but it was rare to see a college women’s team dominate sport, because schools mostly invested in male teams.

While women in general had financial roadblocks, there was a group of female athletes, Tennessee State, that dominated women’s track and field nearly 20 years before Title IX was existed.


Track coach Edward Temple took over the women’s program at the college in 1950, with a budget that was only $300.Added to that, the school’s the facilities were poor. The program, with no financial help to start with in the early years, produced 40 Olympians and 34 national titles during Temple’s 44-year career.

Eight Tigerbelles, including Wilma Rudolph, Wyomia Tyus, and Chandra Cheeseborough, were inducted into the National Track and Field Hall of Fame.

Rudolph became an international star, when she became the first American woman, of any race, to win three gold medals in track and field during a single Olympic Games, when she won gold in the 100 meters, 200 meters, and served as a member of the gold medal winning 4 by 100 meter relay team, at the 1960 Olympic games in Rome.

Known as “The Tornado,” Rudolph was the fastest woman in the world at the time. She was nicknamed “La Gazzella Nagra” (The Black Gazelle) by the Italians and “La Perle Noire” (The Black Pearl) by the French.

Tyus was the first woman to retain the 100 meter gold medal when she won it for a second time in 1968. She went on to coach at Beverly Hills High School and was a founding member of the Women’s Sports Foundation, which was created in 1974 by tennis legend, Billie Jean King, and is dedicated to advancing the lives of girls and women through sports and physical activity. .

Cheeseborough had her greatest fame in Los Angeles. After missing the 1980 Olympics because of the U.S. boycott of Russia, she won gold medals on the 4 by 100 and 4 by 400 teams, and took home a silver medal in the 400-meter dash at the 1984 Olympics.

Cheeseborough was expected to have been a favorite at the 1980 Olympics. That year she took the gold medal in the 100 meter and 4 by 100 meter relay at the Olympic Boycott Games in Philadelphia. The event was known as the Liberty Bell Classic, where 29 of the boycotting countries of the American-led protest of the 1980 Olympics participated.

Tennessee State was able to produce many of these great athletes before the school offered athletic scholarships to the women’s track program in 1967.

Coach Temple notes that one of his greatest accomplishments is that out of the 40 Olympians, 28 of them have master’s degrees and 14 of them have either a M.D. or Ph.D.

Tennessee State’s program proved that women can compete on the same stage as the men, and they did it without financial assistance.