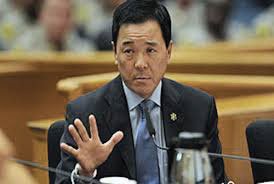 The former second-in-command of the Los Angeles County Sheriff’s Department was sentenced Monday to five years behind bars for his role as ringleader of a multi-faceted conspiracy to thwart a federal probe of misconduct in the jails.

The judge set Aug. 1 for Tanaka to surrender to begin serving his time.

The diminutive Tanaka remained stone-faced and stood ramrod straight throughout the hour-long hearing before a tightly packed courtroom, declining an opportunity to speak to the judge.

Before imposing sentence, Anderson blasted the defendant for displaying arrogance” during previous court appearances and refusing to show remorse for what the judge termed a gross abuse of public trust.”

“One of the most troubling things is ... your efforts to shield dirty deputies have been largely successful,” Anderson told the defendant, noting that despite more than a dozen convictions in related cases, some among your clique “remain in the department in positions of authority.”

Tanaka was found guilty in April of felony charges of conspiracy to obstruct justice and obstruction of justice.

“After several trials and tens of convictions of Los Angeles County sheriff’s officials, one thing is abundantly clear: Defendant Paul Tanaka is responsible not only for obstructing justice, but also for fostering the culture that led to the significant problems in the Los Angeles County jails,” federal prosecutors wrote in pre-sentencing papers filed with the court.

“While defendant claimed at his and three previous trials that he had only limited involvement in the conspiracy, the evidence showed instead that he was the ringleader from the beginning,” Assistant U.S. Attorney Brandon Fox wrote.

Tanaka,  who remains the mayor of Gardena despite his conviction, was the ninth sheriff’s official convicted of criminal conduct based on the circumstances surrounding the hiding of inmate-informer Anthony Brown, a scheme that also involved witness tampering and the threatened arrest of an FBI special agent assigned to the jails investigation.

Tanaka’s attorney, H. Dean Steward, argued that Baca had total control” of the Brown operation, leaving Tanaka to participate for two weeks while the sheriff was on vacation in September 2011. During that period, the defense contends, nothing happened in the case.”

Tanaka’s 60-month prison sentence is the longest stretch of any defendant in the Brown case.

Seven former sheriff’s lieutenants, sergeants and deputies convicted of conspiracy and obstruction of justice received prison sentences ranging from 18 to 41 months. Their appeal is scheduled to be heard by the U.S. 9th Circuit Court of Appeals in Pasadena on July 5.

The jury in Tanaka’s case deliberated for less than three hours over two days before reaching a decision.

During the trial, prosecutors argued that Tanaka directed co-conspirators in a scheme to derail the 2011 investigation into allegations of excessive force within the jail system.

The case stemmed from events five years ago when a cellphone was discovered in the hands of an inmate at the Men’s Central Jail. Sheriff’s deputies quickly tied the phone to the FBI, which had been conducting a secret probe of brutality against inmates.

At that point, sheriff’s officials closed ranks”—at the direction of Tanaka, prosecutors said—and began an attempt to halt the formerly covert investigation by concealing inmate-informant Brown from federal prosecutors, who had issued a writ for his grand jury appearance.

The charges included a host of overt acts”—including witness tampering and threatening an FBI agent with arrest.