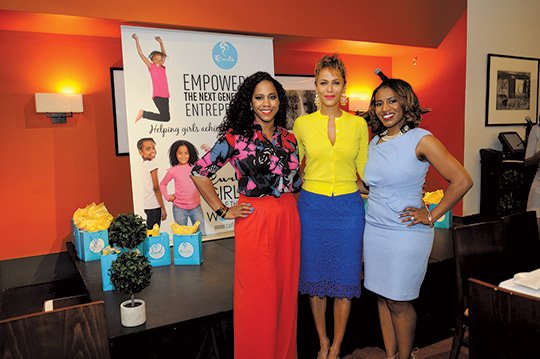 When California native Mahisha Dellinger had a baby, she decided to go natural with her hair. She was concerned about chemicals from hair products being absorbed by her baby.

A few years later, she grew frustrated with her job in corporate America and decided to strike out on her own by founding CURLS, a company that makes natural hair products.

“I wanted to take control of my destiny,” said Dellinger, who is originally from Sacramento but now resides in Dallas, Texas. That was in 2002. More than a decade later, CURLS is a multi-million dollar company with customers in Canada, parts of Europe, Brazil and is now expanding into Africa.

Dellinger said CURLS products are also very popular in London which has a large Afro-Caribbean population.

CURLS has partnerships with major retailers. The company’s products are featured in Target, Sally Beauty Supply, Rite Aid and Walmart.

Dellinger says CURLS’ new Blueberry Bliss line has proved to be extremely popular and has resulted in a 55-percent increase in sales. “That collection is hot,” Dellinger said.

And CURLS’ products are in high demand as more Black women decide to avoid perms and relaxers and go natural. According to a recent Voice of America article, this trend is also occurring in Africa. Like Dellinger, many African women are going natural over concerns about the chemicals found in hair products. According to VOA, a five-year report by Black Women for Wellness, a Los Angeles-based health organization, found chemicals used in hair products were linked to uterine fibroids.

Dellinger said this is not the first time Black culture has experienced a natural-hair movement. In the 1960s, Black people started wearing natural afros, but that was more of a political statement. Now the natural hair movement is more of a personal statement.

“It’s more personally charged,” said Dellinger. “Black women are saying ‘You accept me as I am.’”

However, Black women in corporate America can still face challenges, if they decide to go natural. Some sections of the corporate world are still not comfortable with natural hair.

“It’s hard for people in TV,” said Dellinger. “I have friends who are news anchors and they can’t wear their hair curly.”

Dellinger is also branching out into speaking about branding and entrepreneurship. She was a speaker on panels on the business of the beauty industry at the new “Beauty & Style Expo” at this year’s Essence Festival. She also speaks all over the country at major events and empowerment conferences. Recently, she has been a keynote speaker at the Cleveland Clinic and T.D. Jakes’ MegaFest.

She also shared her story coming from a life of poverty, to graduating from college and running her own company in her book “Against All Odds,” which was published last year.

“I wasn’t really proud of where I came from but I realized after I became successful and beat the odds that my journey is something I should be proud of and share. My goal was to assert, ‘if I can make it, so can you.’ Hopefully, the book will help someone else achieve the dreams that they have for themselves,” said Dellinger.

She added she was proud she overcame her difficult beginnings and was able to make a success of her life.

“According to statistics, I was not expected to succeed in life. The generational cycle of poverty was destined to continue. An unmarried, single mom stuck on welfare or in a dead-end job was my fate. However, I had a vision for my life and was determined that my present circumstances

wouldn’t dictate my destiny,” said Dellinger. “Creating CURLS from nothing and turning it into the successful international company that it is today has exceeded my expectations, and I am incredibly grateful.”