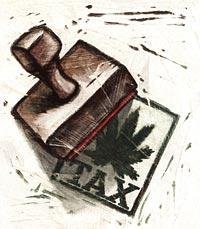 The Board of Supervisors voted 3-2 this week to ask voters in November to approve a special marijuana business tax of up to 10 percent of gross receipts to fund the fight against homelessness.

“There’s an emergency,” said Supervisor Mark Ridley-Thomas, who has unsuccessfully pressed Gov. Jerry Brown to declare a statewide emergency to free up additional funding. “It is urgent that we address this issue.”

However, in the end, Ridley-Thomas voted against the marijuana tax, even after his push for a quarter-cent sales tax failed to garner the four votes it needed to pass. Supervisor Michael Antonovich cast the other dissenting vote. He objected to the idea of taxing a drug that he believes should remain illegal.

The county’s chief executive officer has estimated that $450 million in annual funding will be needed to effectively combat homelessness in the region. A marijuana tax is projected to raise $78-130 million annually, leading Ridley-Thomas to call it the “least effective” choice.

The board also considered a three-cent parcel tax—which was taken off the table before a vote—a quarter-cent sales tax and a general tax on medical and recreational marijuana that would not have been dedicated to fighting homelessness.

More than 100 advocates for the homeless urged the board to move forward with at least one of the measures, including a homeless man who said he hadn’t showered in months.

Many activists pushed for the sales tax, saying it would be the most reliable and timely source of funds. That option was projected to generate $355 million annually.

Others chose not to dictate a particular path, while some suggested that the board put all measures on the ballot and let voters decide.

Pollsters hired by the county found roughly equivalent public support—ranging from 67-69 percent—for all the options.

However, poll numbers fell below two-thirds when measures were in the third rather than first position on a hypothetical ballot or when voters heard additional messaging about the issues. The marijuana tax will require two-thirds of voters to approve its passage.

Revenues from the marijuana tax would also depend on voters passing a separate November measure to legalize the use of recreational marijuana.

The tax would be on businesses that grow and sell medical and recreational marijuana. When paired with state and other taxes, it could mean that buyers pay up to 34 percent in taxes on purchases, assuming business owners pass costs through to buyers.

Some marijuana advocates warned that high taxes could create a continuing black market for the drug.

Based on experience in Colorado, Washington and Oregon, staffers said revenue would come in slowly and build over a period of about two years after legalization. No tax on recreational marijuana could take effect until at least 2018, according to county attorneys.