Teen has plans to fly around the world, break record 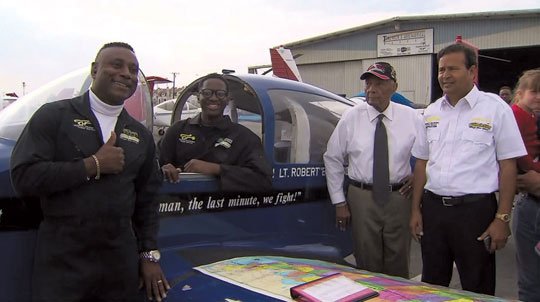 A Compton teenager took off on a planned cross-country flight this week day as the first step in what he hopes will be a record-setting around-the-world adventure.

Isaiah Cooper, 16, took off from Compton airport with a flight instructor on a weeklong round-the-country trip designed to serve as a test run for his larger goal of breaking the Guinness World Record for youngest pilot to fly solo around the world.

Isaiah hopes to make the trip when he turns 18. The Guinness record is held by Matt Guthmiller of South Dakota, who was 19 when he circumnavigated the globe on his own in 2014, ending his voyage at Gillespie Field in El Cajon.

For his test run that began Tuesday, Isaiah will fly to Washington state, then east to Maine, then south to Florida and back to Compton.

On a GoFundMe page, Isaiah wrote that he began attending the youth aviation program at Tomorrow’s Aeronautical Museum in Compton when he was 5, but he dropped out when he began hanging out “with the wrong crowd” and doing “seriously self-destructive things.”

“My grade-point average dropped to 0.8,” he wrote. “Realizing that this was not how I wanted to live my life, I returned to TAM, refocusing my efforts in school and dedicating my life to becoming a pilot. I raised my GPA to 3.7.”

He said he hopes his attempt to break a world record will inspire other kids to turn their lives around and work to achieve their goals.

Robin Petgrave, founder of the museum, told Fox11 that Isaiah was inspired by Barrington Irving, who was the youngest person to fly around the world solo in 2007, and the first Black pilot to accomplish the feat.

“He thought, `I want to do that,”’ Petgrave said. “ ... It’s a big adventure, so to get practice, the only way to get cross country skills is to fly cross-country, so he figures if I’m going to fly around the Earth, I’m going to start off by flying around America.”