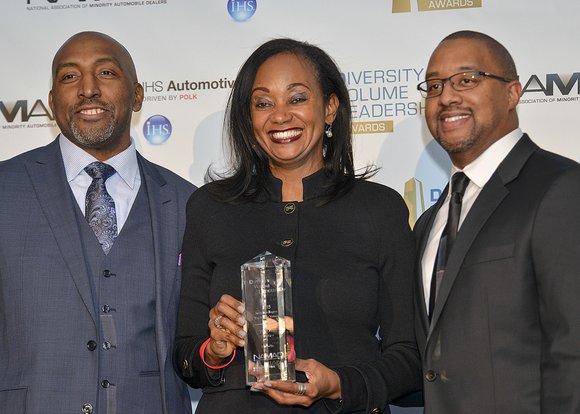 Toyota demonstrated their commitment to reach minority consumers, winning 10 out of 20 top honors during the Diversity Volume Leadership (DVL) Awards in Detroit, Mich., a few days before the North American International Auto Show opened to the public.

The awards were determined based on new vehicle registration data collected from October 2014 through September 2015 by IHS Automotive, a research group that provides insight into the global auto industry.

The National Association of Minority Automobile Dealers (NAMAD), a non-profit group that advocates for diversity in the auto industry and IHS Automotive presented the awards.

“We wanted to recognize, celebrate and educate the fastest growing group of new vehicle consumers in the automotive industry which happens to be the diverse consumers, African Americans, Asian Americans, Hispanics, Native Americans and women,” said Marc Bland, the vice president of diversity and inclusion for IHS Automotive.

Toyota won DVL awards for sales in the New England region (RAV4), the Plains region (RAV4) and the Southeast region (Corolla) as well.

The Toyota Corolla drove home with the crown for Top Ethnic Vehicle.

Alva Adams-Mason, the director of African American Business Strategy and Corporate Communications of Toyota North America, said that even though Toyota has worked hard for decades to establish relationships in minority communities, the team was still surprised by how much those communities have supported the automaker.

Adams-Mason said that it was important for the Toyota team to attend the first annual Diversity Volume Leadership Awards to see the progress of the company’s efforts.

Damon Lester, the president of NAMAD, said that the automakers that won awards pursued and continue to pursue diversity as a business imperative at all levels.

“The winners are paying close attention to the ethnic marketplace,” said Lester.

“We’re dealing with facts, that means that everybody has the opportunity to get there,” said Bland. “If you sell the most, you get an award.”

Bland continued: “What we proved, and will continue to prove, is that diversity and a focus on ethnic consumers and women is not a play of ‘Oh, that’s nice,’ or a pat on the back. It’s about growing your bottom-line business. These are the new trendsetters, these are the new volume breakers.”