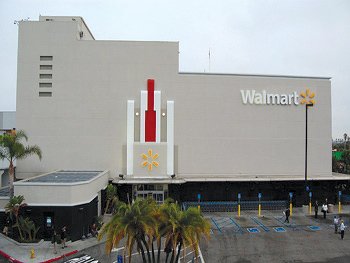 Residents of South Los Angeles and the Crenshaw District are once again facing the prospect of having to drive further distances in order to purchase affordable food to feed their families. That’s thanks to the closure Sunday of the Walmart store in the Baldwin Hills /Crenshaw mall.

According to Walmart spokesperson Delia Garcia, the closure of the store, which opened with much fanfare in 2003, was a “business decision” based on a number of factors including financial performance and a change in the retail giant’s changing customer strategy.

The exit of Walmart from the Crenshaw area was a surprise to elected officials, said 8th District Councilman Marqueece Harris-Dawson, who noted that he and his colleagues found out about the closure from the media. A big yellow and black sign on the Crenshaw Boulevard side of the store heralded the news during the Martin Luther King Jr. parade, ironically as Mayor Eric Garcetti sat across the street at the KDAY Radio live broadcast talking about the jobs the arrival of the Rams would bring to the region.

The closure of the Walmart eliminated 400 positions and the opening of a store in Compton would result in the addition of 300 jobs.

Walmart said the Baldwin Hills store featured limited grocery offerings, and that there are stores in Hawthorne and South Gate that are eight and nine miles away, respectively, that offer a larger selection of food items. Additionally, the retailer is in the process of opening a store in Compton.

But that does not help the many public transit dependent individuals who often walked or took the bus to the location. Nor does it negate the continuing erosion of the variety of grocery stores in the area in the last decade.

Councilman Dawson-Harris noted that the grocery industry has not been a good neighbor to the community in the last 10 years. There have been the exit of Ralph’s locations from Western and King, Crenshaw and Rodeo, Manchester and Hoover, as well as Crenshaw and Manchester.

It’s very early in the process to say what other retailer could fill the vacancy left by Walmart, said Dawson-Harris, but there are some new players coming into the market, as well as other traditional retailers looking at new models. He also said he hopes Walmart won’t actively work to prevent other food retailers from stepping up to the plate.

Harris-Dawson speculates it may take several months to fill the void left by Walmart, but does not guarantee that the slot will be filled by a food retailer.