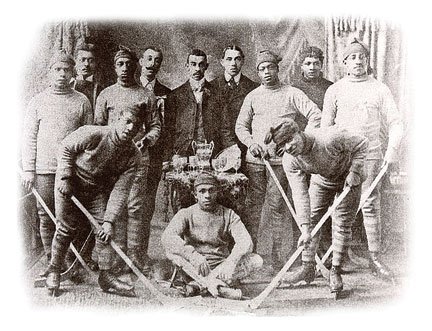 Out of the four major professional sports in the United States (football, baseball, basketball and ice hockey), ice hockey has been the Whitest. Nearly all of the National Hockey League’s (NHL) players are White, and the well-known history of the sport would make people believe that Caucasians created and developed the sport on their own.

While history books showcase White players that date back to the 1800s, the roots of the sport actually comes from Native Americans, and the game was revolutionized by African Canadians. Black hockey players were critical in taking a game that was primitive, and helped create what we see today.

According to the book “Black Ice,” written by George and Darril Fosty, the sons and grandsons of American slaves who escaped to Canada were not given the proper credit for innovating the game.

The first reports of hockey being played dates back to 1815 along the Northwest Arm, which is a river south of Halifax in Canada. At that time, the region was not home to a large White settlement, but was instead the site of a small Black enclave. Reports say that the residents would play hockey in the winter months, when the river froze over. It is unknown whether or not these were the first ice hockey games, but it does mean that Blacks were playing the sport well before it became popular in the late 1800s.

As the development of the sport into contemporary ice hockey took place, the first organized indoor game was in Montreal in 1875, and by the mid 1890s, there were hundreds of teams in Canada and Europe. At this time, there was the first recorded mention of all-Black hockey teams, which appeared in 1895. By 1900, the Colored Hockey League of the Maritimes (CHL) was created, and it was headquartered in Halifax, Nova Scotia.

The CHL was initially a church league formed by Black Baptist Ministers and church administrators who wanted to use the league to help Blacks climb up the social latter and gain equal footing with the White community. They used sports as the catalyst. The league was based on faith, and emphasized sportsmanship and athleticism over brute force. The league used the Bible as their rulebook.

The league featured more than 400 African Canadian players who were typically natives from Nova Scotia, New Brunswick, and Prince Edward Island. As the game continued to develop, the CHL featured more faster-paced action on the offensive end of the rink than the White leagues, which played a more physical style of game. It has been reported that the slap shot, which has been a staple for more than a century, was first used in the CHL, about 50 years before it became popular in the NHL. The league also revolutionized the goaltender position by allowing the goalie to play in an upright position, which allowed him to use his feet to a much greater degree.

At times, the top Black teams were able to defeat the best White teams. Typically there would not be a rematch, and those victories were not well publicized.

The CHL flourished until World War I, but the league collapsed, and it was pretty much forgotten about. The innovations that came out of the league were later credited to White players, and the Hockey Hall of Fame in Toronto did not recognize the accomplishments of the league.

The most noted moment of Blacks in hockey happened when Willie O’Ree broke the color barrier in the NHL in 1958, even though Black players greatly contributed to the game years before the NHL existed.