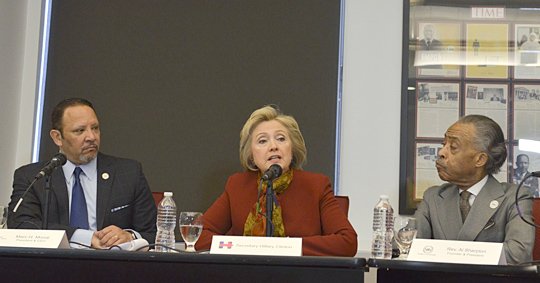 Former Secretary of State Hillary Clinton (center) met with Marc Morial, the president and CEO of the National Urban League (left), Rev. Al Sharpton of the National Action Network and other leaders from civil rights groups to discuss the needs of the Black community. (Freddie Allen/AMG/NNPA)

A few days before presidential hopeful Hillary Clinton racked up a huge win in Nevada’s Democratic primary, largely thanks to the overwhelming support that she received from Black voters, the former Secretary of State met with civil rights leaders for a frank discussion about the 21st Century Agenda for Jobs and Freedom.

As presidential candidates covet Black voters, civil rights leaders want to make sure that the needs of the Black community are also addressed.

“For the first time in American history, we will watch a Black family leave the White House and we do not want to see the concerns of Blacks leave with them,” said Reverend Al Sharpton, the founder and president of the National Action Network.

The 21st Century Agenda for Jobs and Freedom, crafted about three years ago around the 50th anniversary of the March on Washington, outlines a number of challenges affecting the Black community and identifies five main domestic goals to address those challenges.

Last Tuesday, Clinton met with leaders from nine different civil rights groups including the National Urban League, the NAACP, the National Coalition on Black Civic Participation, the National Action Network, the Lawyers’ Committee for Civil Rights Under Law, the Leadership Conference on Civil and Human Rights, the NAACP Legal Defense and Educational Fund, the National Bar Association and the National Council of Negro Women.

Marc Morial, the president and CEO of the National Urban League said that the nine historic civil rights organizations represented tens of millions of Americans and that all of their organizations were multicultural and multi-ethnic.

Morial also made it clear that the meeting was not an endorsement of Hillary Clinton’s run for the White House.

“Each of us is either a 501(c)(3) or a 501(c)(4) organization. Our organizations do not endorse or recommend candidates for public office,” said Morial. “This is a meeting that we have convened and we have organized in an effort to provide to every candidate who is running for president of the United States, be they Republican or Democrat, with the opportunity to hear from us on issues of civil rights, social justice and economic justice in America, today.”

Clinton said that her staff has “always found an open door and a responsive ear to help us forge the kind of policies that we think can directly address many of the issues” that the leaders raised during the meeting.

“My campaign is really about breaking every barrier. I believe that America can not live up to its potential unless every single person has the chance to live up to theirs,” said Clinton.

The former Secretary of State also met with more than a dozen “emerging leaders” that represented the next generation in the leadership of the civil rights groups that attended.

“While we are proud to be historic organizations, with legacies from the NAACP and the National Urban League being over 100 years old, others being 50 to 25 years old, we are also proud that, in every case, every one of our organizations is standing up and emphasizing the new generation and emphasizing the leadership role that the new generation can, will and must play in the future of this country,” said Morial.

Leigh Chapman, the president of the National Bar Association’s young lawyer division that represents lawyers under 40 and lawyers who have practiced less than 10 years, said that access to education without the burden of lifetime debt, ensuring full participation in the political process, eliminating barriers to voting, and ending mass incarceration were a few of the issues that they wanted the next president to address.

Christopher Wilds, a legal fellow at the NAACP Legal Defense and Educational Fund (LDF), said that for 75 years LDF has been engaged in protecting the rights of African Americans and other minorities in the areas of political participation, education, criminal justice and economic justice.

“Although young people of color are often disproportionately impacted by legislative judicial and policy decisions, we rarely have or hold the position to directly control those positions, said Wilds. “Growing use of discriminatory voter ID laws, the current attacks on affirmative action, the disinvestment in African American communities, the continued targeting of youth of color by police and the criminal justice system all to often work together to turn the American Dream into a nightmare.”

Clinton said that it was absolutely critical for the next president to work on a full array of issues that stand in the way of every American living up to their full potential.

“I am not a single issue candidate, we don’t live in a single-issue country and we have work to do,” said Clinton. “And that work can only be done in partnership with one another to advance the cause of civil and human rights and to live up to the ideals of our country.”

Clinton continued: “Whether it’s student debt or it’s a judiciary that is not as diverse as it needs to be, or whether it is criminal justice issues or voters’ rights issues we have work to do.”

Clinton added that her campaign, and her presidency, if she was so fortunate, must reflect the thinking, the planning and the proposals of the young leaders who attended the meeting.

“Our aim is not partisan politics, our aim is not to decide on a candidate to endorse,” said Morial. “Our aim is to impress upon these candidates the challenges of these times and the important creative and thoughtful ideas that we have to solve the problems that this nation faces, with particular emphasis on the challenges faced by communities of color and urban communities, those who have been locked out and left out of the economic system in the 21 century.”