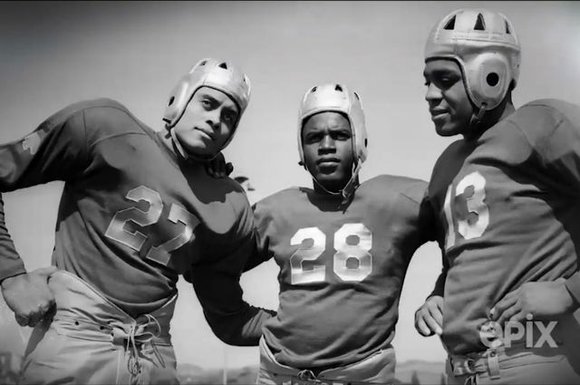 Kenny Washington, Jackie Robinson, and Woody Strode while playing for UCLA. All three went on to break color barriers. 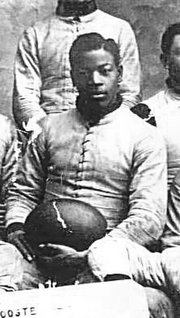 Frederick Douglass “Fritz” Pollard became the NFL's first Black head coach. After him, there was not a Black head coach until the Los Angeles Raiders hired Art Shell in 1989.

Jackie Robinson became a trailblazer for breaking Major League Baseball’s color barrier, when he made his debut with the Los Angeles Dodgers in 1947. But one year earlier, two of his UCLA team mates, Kenny Washington and Woody Strode, made their NFL debuts, becoming the first Black NFL players in the modern era (post WWII).

Washington’s and Strode’s accomplishment did not garner the attention that Robinson’s did because, at the time, football was a niche sport, while baseball was America’s past time.

The NFL has a similar history as baseball. Black players flourished in both sports well before Robinson, Washington, and Strode. In 1878, John W. “Bud” Fowler was the first Black player on an all-White major league baseball team. There were a number of Black players who played alongside Whites players in professional baseball, but by the late 1890s, teams began to prohibit the signing of Black players. The racial ban was only for Black players. However, Latin and Native Americans were allowed to play in small numbers.

In professional football, Charles W. Follis, also known as “The Black Cyclone,” was the first Black player when he played for the Shelby Blues of the Ohio League from 1902 to 1906. Follis also played baseball for the Cuban Giants in the Negro League.

Branch Ricky was one of Follis’ teammates while playing football. He went on to become general manager of the Brooklyn Dodgers, and made history by signing Robinson.

The NFL was established in 1920, and there were nine Black players in the league at the time. One of those players, Frederick Douglass “Fritz” Pollard, went on to become the first Black head coach in the NFL when he was a player/coach for the Akron Pros. There was not another Black head coach until Art Shell in 1989.

The NFL followed Major League Baseball’s path in 1926 by removing all of the Black players from the league. By 1933, integration in the NFL was over.

It is believed that George Preston Marshall, owner of the Boston Braves (which later became the Washington Redskins), openly refused to hire Black athletes, and he pressured other owners to follow suit. After the NFL was integrated, the Redskins were the last team to sign a Black player. It was not until 1962, 16 years after Washington and Strode broke the color barrier, that the Redskins integrated their team.

Washington, who attended Lincoln High School, and Strode, who attended Jefferson High School, were breaking color barriers before they made history in the NFL. While at UCLA, the two of them, along with Robinson and Ray Bartlett, all played in UCLA’s backfield on the football team in 1939. At the time, very few Black players competed in Division I college football.

Washington, Strode and Robinson went on to have successful professional football careers in the Pacific Coast Football League, which was integrated. Washington was the star of that league, playing for the Hollywood Bears, and was teammates with Strode. Robinson was the star player of the Los Angeles Bulldogs. His football career lasted until 1945, when he met Ricky and decided to play baseball exclusively.

The Los Angeles Coliseum Commission played a major role in breaking the NFL’s color barrier. In 1946, columnist Halley Harding, who played in baseball’s Negro Leagues, for the Harlem Globetrotters, and for Fritz Pollard in football, became a crusading journalist and civil rights activist. He wrote for the now-defunct Los Angeles Tribune, and represented a group of Black newspapers when he implored the commissioners to stipulate that the Cleveland Rams, who were on the verge of moving to Los Angeles, integrate the team, if they wanted to use the taxpayer-supported venue.

The Coliseum Commission granted the Rams a three-year lease. While it was not a part of the lease agreement, it was implied that the team had to sign Black players. Two months later, Washington and Strode were signed, and they made their NFL debut that fall. The 12-year, unwritten color ban was over.

The same argument was used to force the Redskins to integrate. They had to sign Black players before they could move into their publicly-funded stadium, which later became known as RFK Stadium.