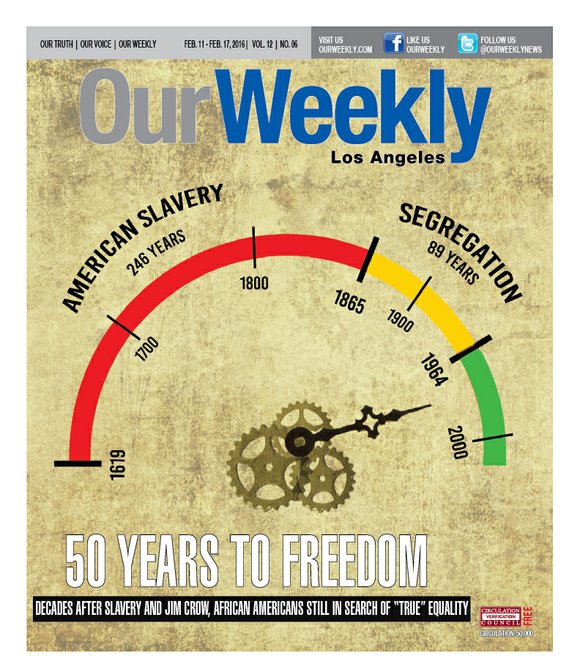 “Lincoln freed the slaves like 130 years ago. How long does it take to get your act together?”

Black people have been free in the United States of America since 1865, but there has consistently been an economic gap between Black and White Americans.

While many people choose to ignore that the history of this country, dating back to when these lands were “discovered,” was built on a foundation that allowed one race of people to dominate everybody else, it is clear that White America has greatly benefited from acts that have taken place over the course of the last five centuries.

A look at history clearly reveals that Black people in America have spent more time in slavery than free. The first documented African slaves were brought to Virginia in 1619, and slavery continued through the Civil War, which ended in 1865. That equates to 246 years of slavery and 150 years of freedom. But those 150 years are really more like 50 years, because African Americans experienced nearly 100 years of oppressive segregation and Jim Crow.

When the 246 years of slavery is combined with the 100 years of segregation, in reality that means that Black people were legally oppressed for 346 years, and have only had slightly more than 50 years of ‘legal’ equality and freedom. However, there have been major obstacles in those 50 years.

Slavery appears to be the starting point for the problems that the majority of Black Americans have endured for their entire existence in this nation. But there may be a larger issue in the situation that was not ended in 1865 or 1964 with the signing of the Civil Rights Act.

“The original sin of America was not slavery; it was White supremacy,” said sociologist Harry Edwards, Ph.D. “That (belief) mandated slavery, as well as the genocide (of) aboriginal natives, as well as segregation, as well as lynching, as well as attacks against anybody else who is Black and has success. That continues and remains with us to this day,” contends Edwards, best known for co-engineering the “Revolt of the Black Athlete” in the late 1960s. This movement eventually led to San Jose State University becoming the first major college in the U.S. to cancel an athletic event under the threat of racial protest.

While the United States has put slavery and segregation in the rearview mirror, and White America has apparently separated itself from the oppression of an entire race of people, it can be said that White supremacy and its actions keep the Caucasian race above all others.

“When the United States of America was founded, the benefits were not for all of the people,” said Courtney Young, who studied social Justice at UCLA and teaches at Executive Preparatory Academy charter school. “Even though the Constitution says ‘We the people of the United States.’ They weren’t talking about Black people. They weren’t talking about slaves, or free Black people.”

White supremacy is one of the foundations of this nation, and it is older than the institution of slavery. Young points out that when Christopher Columbus “discovered” the Americas in 1492, he led his men to loot the land of its resources, and murder the people who occupied the region. Not long after that, many Europeans made the trip across the Atlantic Ocean seeking liberty, freedom, and free enterprise in the so-called “land of the free, home of the brave.”

The creation of the 13 Colonies in the early 1600s eventually led to independence from England, and the United States of America was born in 1776. At that point, the concept of Manifest Destiny, which was the need to extend the U.S. boarders from the shores of the Atlantic Ocean to the shores of the Pacific Ocean, gave White people a sense of entitlement. Whites thought that the land and resources that were being utilized by the indigenous people of this land for centuries before Whites’ arrival were theirs for the taking.

More than 500 treaties were made between Whites and Native Americans, primarily for land. But nearly all of them were broken, nullified, or amended, according to the Partnership with Native Americans. Lands that were either fertile or possessed precious metals (gold, silver, cooper) were taken, and indigenous residents were forced on to undesirable lands.

Manifest Destiny ultimately led to Native American genocide, said historians. This genocide can be traced back to 1637, and within 200 years, a thriving Native American population was cut down from an estimated 15 million to less than one million people.

While White people were exterminating Native Americans, they were also building this country on the backs of slaves, and created legislation that made Black people less than human.

In 1787, the Three-Fifths Compromise was added to the United States Constitution, and which allowed Southern states to count three-fifths of each slave to determine political representation in the House of Representatives. The decision not only counted Blacks as less human, but also gave new life to the institution of slavery by giving Southerns political additional power. The compromise was not legally challenged until the Dred Scott case in 1857.

The Dred Scott Decision was also damaging to Black people, because it determined that any person descended from Africans, whether slave or free, was not a citizen of the United States, according to the Constitution. The Supreme Court ruled that African Americans had no claim to freedom or citizenship.

The Naturalization Act of 1790 was another law that gave White people control over this land. The original law limited citizenship to immigrants who were free White persons of good character. That excluded Native Americans, indentured servants, slaves, free Blacks, and Asians.

At this point in the country’s history, everybody had freedom for the first time, but White supremacy still gave Caucasians the power to rule over other races. President Chester A. Arthur signed the Chinese Exclusion Act in 1882, which was one the most significant restrictions on free immigration in U.S. history, because it prohibited all immigration of Chinese laborers. This act was the first law implemented to prevent a specific ethnic group from immigrating to the United States, and it was not repealed until 1943.

Chinese immigrants were viewed as competition for jobs and resources starting in the late 1840s. Anti-Chinese group organized in California, such as the Workingman’s Party and the Supreme Order of Caucasians, tried to legislate Chinese exclusion.

The United States has a lengthy history of limiting, oppressing, and/or exterminating non-White people, and many of those actions did not stop for Black people with the abolishment of slavery.

The end of the Civil War in 1865 made all Black people free, but it did not do anything to stop White supremacy, according to Dr. Edwards. And for the next 100 years, White people used segregation and Jim Crow laws to insure that the balance of power greatly favored their race.

Laws were made that denied Black people the right to education, employment, housing, medical care, and to utilize interstate transportation. While the Reconstruction Act of 1867; and the ratification of the Fifteenth Amendment in 1870 provided Blacks the right to vote; and the Civil Rights Act of 1875 forbid racial segregation in accommodations, it did not prohibit segregation in schools.

Not too long after that, in the 1880s, “Jim Crow” segregation began, with the Plessy v. Ferguson case of 1896 putting “separate but equal” in the law books. This ruling allowed segregation to flourish, and by the early 1900s, segregation was an institution in all of the Southern states, and could be found in many areas around the nation as well. The workforce and military were both segregated.

This allowed White supremacy to continue, because nothing was equal. Services and facilities for Black people were always of a lower quality than those for Whites. Public schools for Black children typically received less funding.

Underfunded schools may have been the biggest blow to Black Americans, and allowed White America to continue to be the dominant race in the United States. As Malcolm X stated in 1964: “When you live in a poor neighborhood, you’re living in an area where you have to have poor schools. When you have poor schools, you have poor teachers. When you have poor teachers, you get a poor education. Poor education (means) you can only work on a poor paying job. And that poor paying job enables you to live again in a poor neighborhood. So it’s a very vicious cycle.”

That “vicious cycle” repeated itself across the generations as Black children were born into it, did not have much of a way out of it, and when they became adults, their children were then born into it. This, along with housing restrictions, created ghettos that Black people still live in today. Black people were undermined by the lack of education.

“Education is also a form of power,” said Young of Executive Prep. “It empowers people to be able to move forward. To be able to support their communities. What education does is that it gives you the tools that you need in order to be successful in life. Reading, comprehension, (and) writing, are simple things that people may think that they do not need. Why do I need to know the difference between ‘there,’ ‘their,’ and ‘they’re?’ Why is it important? First of all you won’t be taken seriously in the greater society, if you cannot communicate what you need, communicate what you want. You can’t communicate what your community at large needs, continued the history instructor. “If they don’t go to school, they do not know that they have access to any kind of person in politics so that they can change things.”

Legal segregation continued right into the 1950s, with the first blow against it coming in 1954 with the Supreme Court decision in the case of Brown vs. Board of Education. That case stated that the state laws which established separate public schools for Black and White students was unconstitutional. It overturned the Plessy v. Ferguson statute, and it was a major victory of the Civil Rights Movement. It ultimately led to the abolition of segregation with the Civil Rights Act in 1964.

For the first time since African slaves were brought to the Americas in 1619, 364 years later, Black people finally had ‘legal’ equality. That was just a little in excess of 50 years ago. After having a 364-year head start, where White people were allowed to build financial wealth and dominate this country, is it reasonable to expect Black people to ‘catch up,’ ask historians?

Over the past 50 years, even with the ‘legal’ equality, Black people have still struggled to break the ‘vicious cycle’ that Malcolm X spoke about in 1964. Discrimination, poor schooling, underemployment, a school-to-prison pipeline, housing segregation, and racial profiling have all undermined a group of citizens who have equal rights by law. However, even with equal rights, Black people have still been undermined while White people enjoy the fruits of their ancestors’ labors..

The foundation for Black people to be second-class citizens was built over a 364-year period, and now Black people, even with obstacles still in the way, have only had 50 years to close the gap.

“It’s a mindset that we have that has always followed us through the years and generations,” Young said. “From our ancestors. We’ve always not had, or not been able to, or not participated in (this system). But White Americans have never had that struggle.”