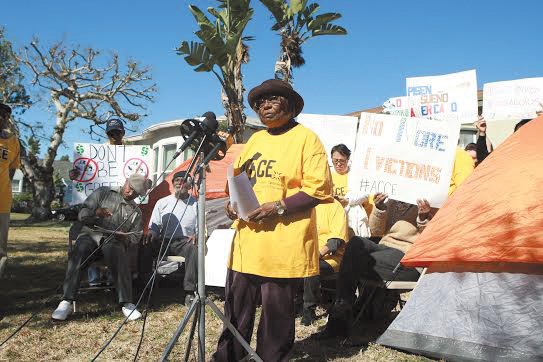 Ruby Smith addresses the media in front of her home of 49 years She is fighting a “fraudlent eviction” with the support of the Alliance for Californians for Community Empowerment (ACCE).\OW Photo courtesy of Jason Lewis.

South Los Angeles resident Ruby Smith, 82, is fighting Wells Fargo Bank to keep the home she purchased in 1967, and paid off about 20 years ago. She has been served an eviction notice, but her family and local supporters are fighting to keep her in the home.

The issue is over a $400,000 loan that was taken out in Smith’s name, which she says is fraudulent.

According to Smith, she sought out a loan in 2006 to purchase a car. After being told that she did not qualify, she met a broker who was referred to her by a Bank of America employee.

Smith said she met with the broker, and signed papers, which she believed were simiply to determine how much she might qualify to borrow, according to the Alliance of Californians for Community Empowerment (ACCE), a multi-racial, democratic, non-profit community organization building power in low to moderate income neighborhoods to fight and stand for economic, racial and social justice.

Smith claims after that moment, she never heard from the broker again. Then a few weeks later she received a loan for $400,000 from Countrywide that had been taken out against her home in the name of both she and her husband. However, ACCE said her husband was not even at the meeting. And Smith said that she did not ask for a dollar amount when she signed the papers.

When Smith received the money, she asked how she could annul the loan, and was instructed to send the money to a title company. She did so (minus what it would cost to purchase the car she wanted). But that did not resolve the situation, which now has been going on for more than 10 years.

Smith’s husband died in 2010, but her family is questioning a document that pertains to the situation; the document apparently has his signature on it, and was signed after his death.

“We believe that it was fraud, because there was no loan taken out by my mother and her husband,” said Gary Harris, Smith’s son. “My mother and father worked hard for this house. All those times when we were growing up as kids, they told us that they wanted to leave us a home that was considered to be a family home. This is our lifeline. She wanted to leave this home to us, and he wanted to leave this home to us as an inheritance. (It would be so that we could have a place for our kids, and their kids; so that we could have roots.”

ACCE, a grassroots organization, is reviewing Smith's paperwork, and they are trying to help her stay in her home. ACCE officials said they are communicating with the sheriff’s department to hold off on the eviction while she goes to court to resolve the situation. They and the homeowner have also contacted the office of Rep. Maxine Waters, in whose district Smith lives. They have also contacted loan servicer Wells Fargo trying to obtain time to clarify the validity of everything. But at the moment, Smith is unlawfully occupying the house because of the eviction.

“I’m just going to stay here,” Smith tearfully said. “They’re just going to have to drag me off my land, because this is my home. And I have been trying to get everything corrected and meet with Wells Fargo to get some resolution to keep my home. But I have not been able to do that. They have not met with me.”