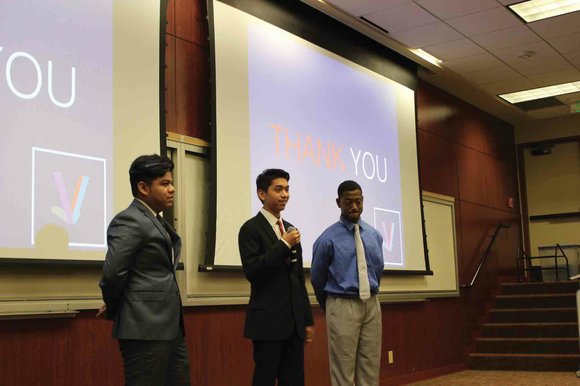 His appearance at the seventh Teens Exploring Technology (TXT) Demo Day held Saturday morning at the USC Salvatori Computer Science Center was not unexpected—but he was only supposed to encourage the participants. But his enthusiasm prompted rapper Lupe Fiasco to go farther. And like the entrepreneurs the program is training the 14-18 year old African American and Latino males to become, the organization shifted gears and made room for Fiasco to serve as a judge for the business plan competition and offer the 100 or so young men encouragement.

At the end of the day, Fiasco joined with the other judges—Jessica Flores, Riordan Foundation president; philanthropist Susan Bloomfield of the Bloomfield Family Fund; and Di-Ann Eisnor, a Google executive, angel investor and “neogeographer” to select the three winners from the eight competing teams.

During the program, Fiasco and Eisnor introduced the youth to the Neigborhood Start Fund, a competition designed to invest in businesses located in neglected neighborhoods around the country. The fund grew out of a connection the rapper and Eisnor made when they were both Henry Crown fellows at the Aspen Institute. Out of their shared dream, the duo created the Neighborhood Start Fund with $1 million and set a goal of developing $100 million companies in low-income, high-crime communities where venture capital rarely shines.

According to Eisnor the fund reviews potential ideas and provides selected businesses with $5,000 in funding to help entrepreneurs begin to develop a prototype. Once viable prototypes have been created, the business owners can compete for $25,000 to take the business to the next step.

In addition to seed funding, participants can attend monthly workshops that will help individuals grow their businesses and receive mentoring assistance.

The first place finisher at Demo Day received $4,000 in seed funding to begin turning their dream into a business reality. Second and third place each won $1,000. And each of the top three team members will take a trip to Silicon Valley. Other prizes included Disneyland tickets and Dr. Dre Beats headphones.

The second place winner, Owly created the app Cut It, which enabled users to order food from a mobile vendor, pay for it, and then pick up the order without waiting in the long lines that some food trucks have.